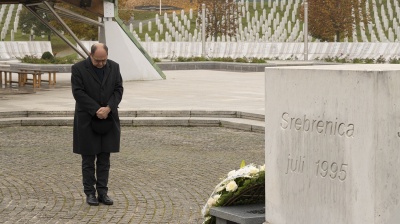 Over 25 years after the Dayton Accords set out the unwieldy post-war Bosnia & Herzegovina construct with a unitary state divided into separate ethnic enclaves and the Brcko district, US and EU military and defence officials have suddenly sounded the alarm on disintegration danger after a long period of averted attention. They immediately cite the long-time machinations of Republika Srpska leader Milorad Dodik coming to a head with Russia and Serbia’s encouragement, as he demands a stand-alone tax and security authority. President Dodik’s opposition, including to official acknowledgment of the Srebrenica massacre as genocide, has routinely precluded government co-ordination. It resulted several years ago in an IMF programme cut-off due to unworkable governance, a rare event that highlighted underlying economic dysfunction since the massive corps of aid workers and advisers left in the immediate conflict aftermath, with mainstream emerging market blueprints lying on a shelf.

The answer to the Dodik as well as Bosniak and Croat political centrifugal forces should be a renewed growth and reform platform to catch up with Bosnia’s Western Balkan neighbours on the path to EU entry. Foreign experts can re-engage, but work must draw from experienced bankers and business leaders in Bosnia’s constituent parts so that they rediscover a common mission sense.

Coal mine unrest after the minimum wage was cut en route to eventual clean energy sourcing, and an ex-defence minister’s arrest over procurement corruption, reinforce chronic gloomy headlines that obscure bright spots. GDP growth was 11.5% in the second quarter, an almost two-decade high after an 8% contraction in 2020, the worst in 25 years. The European Bank for Reconstruction and Development (EBRD) predicts a 4% expansion for the full year and 3% in 2022. Exports rose 20% through the third quarter, mainly agriculture and mining, both to neighbouring Central Europe Free Trade Agreement countries from ex-Yugoslavia, Albania and Moldova, and to EU core markets. The persistent trade deficit also jumped 10% on manufacturing imports, but the overall good news contributed to a 25% jump in Bosnia’s stand-alone MSCI frontier stock index as a top component at end-November, despite never delivering on privatisation promises.

The IMF’s latest Article IV review roundly criticises state enterprise performance and governance as perennial drags. State companies provide one-tenth of jobs and represent 40% of fixed assets, with accumulated debt equal to 25% of GDP, including unpaid taxes and social security obligations. The Fund believes this figure is understated due to poor data collection, and notes that oversight lags regional peers and wealthier country OECD guidelines, with corruption rife. The prime ministers in each entity lack the capacity to monitor balance sheets and operations through aggregated websites, and to appoint executives based solely on professional-technical credentials.

These weaknesses carry through to the financial sector, where there are multiple development banks, despite enduring World Bank projects either to close them or overhaul them and subject them to central bank regulation. The currency board first initiated with foreign help has been a singular stability anchor, but also an export competitiveness cramp. Political agitators and commercial lobbies have joined to insist on a peg reset, even though depreciation has occurred in real terms with low 1% inflation. Outside this externally imposed exchange rate arrangement, the constituent federation representatives have been unable to agree on prudential rules even as a mass loan-guarantee programme was rolled out for the coronavirus (COVID-19) emergency. A deposit insurance law is nascent, and a bad loan spike is expected as repayment pauses expire, with the central bank missing comprehensive asset classification and resolution criteria.

The full IMF arrangement was cancelled in early 2020 after a lengthy period in limbo. The Fund’s $330mn rapid virus line activated on the outbreak of the pandemic will still leave 5% fiscal and current account deficits this year. Overall debt stands at 40% of GDP and is judged sustainable, with the caveat of state bank-enterprise large uncounted bad loans. President Dodik’s tax revenue grab is driven in part by onerous servicing demands, while Serbia-Republika Srpska ties are facilitated by the former’s June entry into JP Morgan’s benchmark local bond index that will trigger billions of euros in foreign investor inflows, and raise the credit profile of both jurisdictions. Serbia’s fiscal gap is at the same level as Bosnia’s, but inflation was 7% in the third quarter and a hiking cycle will soon begin ahead of scheduled first half of 2022 elections and spur high-yield chasers. Belgrade is also much further along in the EU accession process, and in June reached a formal policy co-ordination instrument with the IMF. Capital market development is a priority that may allow for pilot joint commercial debt and equity operations for Republika Srpska, without outright sovereign endorsement in foreign policy terms.

These pragmatic fixes, along with overcoming decades of policy inertia, are remote prospects with the intra-government tug of war that has succeeded the brutal 1990s one. The international community ploughed billions of dollars into rebuilding, and then diverted resources into the Afghanistan and Iraq theatres which have since wound down just as Bosnia re-erupts. The lesson in all three is that underlying functioning and sound economies and financial systems were often ignored as a long-term conflict reduction recipe. The entities and Brcko can at least find common ground there, and can designate official and private sector representatives to serve on an independent recovery board as an original overdue collaboration to fast-track growth and stability recommendations, and recast the post-trauma solidarity and EU integration spirit a generation later.

OPINION: Ukraine refugee-internal displacement bond gains traction
1 day ago
Russian men fleeing the draft are caught between suspected of being pro-Putin and Western closed-door policies
5 days ago
Sanctioned Russian diamonds are reaching the US consumer, but some are getting there legally – for now
6 days ago
EBRD: Reduced gas supplies and inflation to slow growth further in EBRD regions
7 days ago
ING: Eurozone PMI suggests the region may already be in recession
9 days ago