Russia's GDP is expected to grow by 1.9% in 2017 and 2018 in the latest outlook published by the Organisation of Economic Cooperation and Development (OECD) on November 28.

The OECD's forecast is rather optimistic and is almost in line with 2-2.1% official government's target, which was recently undermined by the disappointing third-quarter GDP numbers and industrial output stumbling in the fall.

The report notes, however, that some growth drivers are temporary, with investment supported by the surge of public infrastructure spending in the first half of 2017 and consumption is driven by rising credit rather than real income growth.

While unemployment will remain low and inflation is seen as declining further, "low productivity, a shrinking workforce, a relatively strong ruble and international sanctions weigh on the outlook," the report warns, while reminding that income inequality and poverty remain high.

The OECD also addressed the banking system that had the central bank intervene in mid-2017 to take over two private banks to avoid systemic risks.

"The central bank should continue using macro-prudential tools to address imbalances in the financial system, while maintaining a level-playing field between public and private banks," the report argues.

The OECD sides with the central bank and asserts that "monetary policy should continue to ease, but remain vigilant," as inflationary pressures might reappear despite inflation undershooting the 4% target.

On the other hand, while the report welcomes the introduction of the new fiscal rules shielding the budget from oil price fluctuations – the so called budget rule -- the budget cuts for 2018 and 2019 are seen as too contradictory.

"More gradual fiscal tightening would be appropriate to foster growth and to reduce inequality and poverty," the OECD believes.

The OECD does not yet take the government's announced labour productivity drive seriously as it forecasts that "labour force will continue to decline, labour productivity will remain low and international sanctions will limit trade, competition and the acquisition of new technologies."

The productivity growth would be supported by "considerable investments in infrastructure and education over time" and by fiscal reforms, such as "higher value-added taxes to finance lower social insurance contributions or an energy tax reform."

The report sees main risks for the outlook stemming from "adverse oil price developments and other external conditions."

OPEC+ oil output cut deal may not be sustainable after March 2018 or may fail to maintain a high oil price. On the other front, global monetary tightening could slow down global growth and hurt Russian exports.

Finally, the OECD outlook assumes that sanctions remain in place, seeing the sanctions as a wild card that has "an equal probability" of being either strengthened further or lifted. 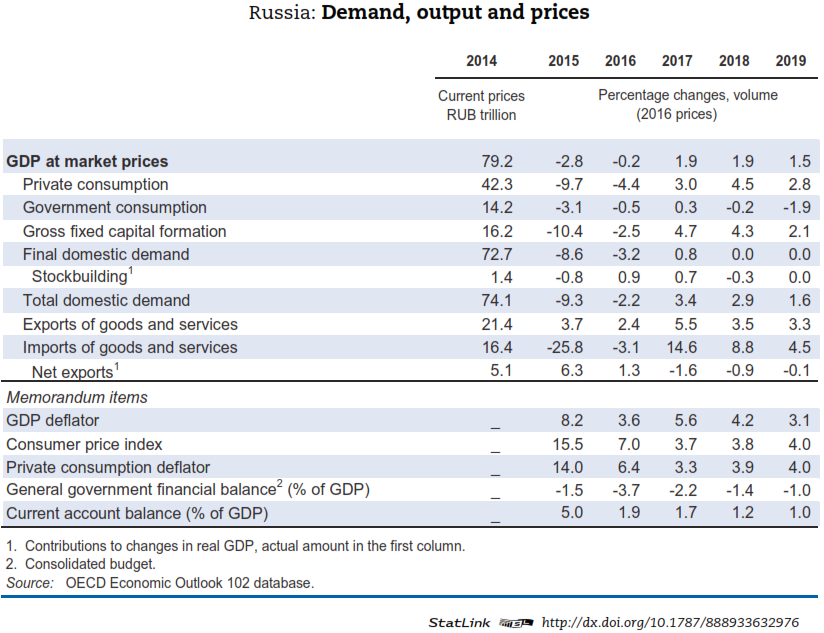