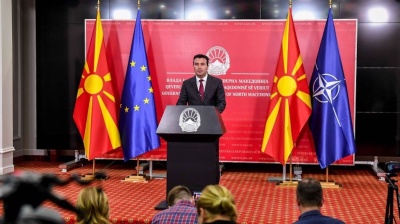 By Valentina Dimitrievska in Skopje October 20, 2019

North Macedonia will hold a snap general election on April 12, Prime Minister Zoran Zaev said on October 20, after the leaders of political parties held a meeting at the president’s residence called following the country’s failure to obtain a date for the launch of EU accession talks.

Despite the promises by EU leaders to set a date for membership talks during the EU summit in October, French President Emmanuel Macron blocked the start of membership talked with North Macedonia and Albania, seeking internal reforms in the bloc before further enlargement.

Zaev, who led efforts to strike a deal with Greece that opened the way for North Macedonia to progress towards EU accession, had staked his political career on Skopje securing a date for the start of talks at the October EU summit. He said before the EU leaders’ meeting that he would resign if Skopje failed to obtain a date.

During the meeting with the president, political parties' leaders reaffirmed their commitment to continue on the EU path, despite the rejection at the Brussels summit.

“This is the only way the country should go and there are no alternatives on that path,” Pendarovski said.

The snap election will be organised by an interim government, whose head will be appointed on January 3.

Meanwhile North Macedonia will wait for all Nato members to ratify the accession protocol for the country to become the 30th member of the alliance by the end of 2019 or early 2020.

The country’s last general election was followed by a long period of negotiation before a government was formed. Zaev’s Social Democrats formed a coalition government with the ethnic Albanian Democratic Union for Integration (DUI) in May 2017, nearly six months after early general elections were held in December 2016. The conservative VMRO-DPMNE, which previously ruled the country for more than 10 years, had a narrow lead among voters but failed to form a government.

Leader of the now opposition VMRO-DPMNE Hristijan Mickoski said following the meeting with other parties’ leaders on October 20 that his party will win the next elections and will form a new reformist government.