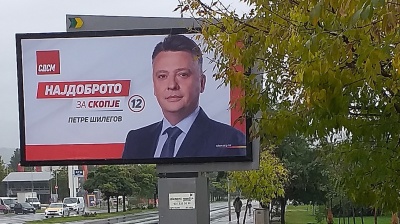 By Valentina Dimitrievska in Skopje October 14, 2021

North Macedonia is to hold the first round of its local election on October 17, seen as a test of the support enjoyed by the ruling Social Democrats led by Prime Minister Zoran Zaev, which won a second mandate in 2020.

Polls indicate a close race between the Social Democratic Union of Macedonia (SDSM) and its partners and opposition conservative VMRO-DPMNE.

North Macedonia’s ruling coalition partners, the SDSM and the ethnic Albanian Democratic Union for Integration (DUI), will support each other in the election. They will run together with two smaller ethnic Albanian parties, Besa and the Democratic Party of Albanians (DPA). In the first round of the elections they will run separately, but will support each other’s candidates in the second round.

Their main rivals will be VMRO-DPMNE in collaboration with ethnic Albanian parties the Alliance for Albanians and the Alternative.

Dozens of independent candidates are also running for posts, which according to experts can mess up the plans of the main parties in the lists for councillor seats, but the voting model will make it difficult for most of them to win a mayor position.

Candidates to become mayors mostly focused their campaigns on infrastructure projects, improving the living standard of citizens, the green agenda and the fight against corruption.

In the capital Skopje the current mayor Petre Silegov from the SDSM is fighting off a challenge from Danela Arsovska, an independent candidate supported by VMRO-DPMNE.

On October 13, six candidates for Skopje mayor participated in a TV debate before the end of the campaign. Participants reminded Silegov of unfulfilled election promises and unfinished projects during his past mandate.

Earlier this year, Silegov started work on a trackless tram project in Skopje, for which the city authorities signed a €70mn loan deal with the European Bank for Reconstruction and Development (EBRD), but the project is only at the stage of drafting a bus restructuring study.

One of Silegov's promises for his second mandate is the completion of reconstruction of the Univerzalna Sala (Universal Hall) concert hall, which was a cultural symbol of the city.

He also promised the construction of a new amusement park after the old one, Luna Park, was demolished to prepare the ground for a new one, by the former mayor from VMRO-DPMNE Koce Trajanovski, but the project was later abandoned when Trajanovski failed to be re-elected for a third mandate.

During the COVID-19 crisis Silegov re-allocated the funds for the amusement park for other infrastructure projects.

"Unfortunately, Skopje may be one of the few capitals in the world that does not have an amusement park," the opposition Levica (the Left) party said.

Zaev said during a party rally on October 13 that his SDSM party would win at least 22 mayor posts only in the first round of voting, while VMRO-DPMNE will win only six.

Different opinion polls show mixed results, some in favour of SDSM and others for VMRO-DPMNE, but the difference is only in the range of two to three percentage points. Levica hopes it will gain votes not only from its own supporters but also from undecided voters.

This will be the seventh local election since the country’s independence from former Yugoslavia in 1991. The country is divided into 80 municipalities plus the capital Skopje.

301 candidates for mayors and 567 lists for municipal councillors have been verified by the state election commission.

19 parties and coalitions as well as 64 independent candidates will participate in the elections.

Over 1.82mn people are eligible to vote in over 3,400 polling stations.

“There is a record number of candidates, lists and coalitions in these elections, which means a lot of voting material. In the second round, that number will surely decrease,” State Election Commission (SEC) president Aleksandar Dashtevski was cited by Kanal 5.

On October 14, the SEC started the distribution of the voting lists with police escort from the printing company in Bitola to all municipal election commissions.

4.5mn ballot papers were printed for the first round of the elections.

For the first time the vote will be conducted with fingerprint scanners for identification of voters, upon the request of the opposition VMRO-DPMNE. People will vote under COVID-19 protocols.

The political campaign for the local elections officially started on September 27 and will last until October 15.

The day before the elections, the elderly, disabled people and prisoners, as well as those who are isolated due to COVID-19 will be able to vote.

The second round of the local elections will be held on October 31.

The first local elections in independent Macedonia, now North Macedonia, were held on November 17, 1996, in which councillors and mayors were elected in 123 municipalities, plus the city of Skopje. The number of municipalities was lowered to 80 in 2013.

In the previous local election held on October 15, 2017, most of the mayor positions were won by the now ruling SDSM.