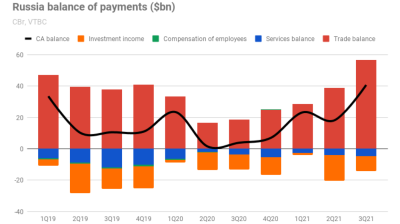 Russia earned even more from non-oil and gas exports in the 3Q21 than it did from hydrocarbon exports and is on course to have a surplus of over $120bn this year – a new record. / bne IntelliNews
By bne IntelliNews October 13, 2021

Non-oil exports drove Russia’s current account balance to a historical quarterly high of $40.8bn in the third quarter, the CBR reported on October 11.

“The increase was primarily due to the improvement in the trade in goods and goes beyond oil & gas exports: non-O&G goods exports advanced to $73bn, up +$25bn year on year,” Alexander Isakov, chief economist at VTB Capital (VTBC), said in a note. “The upturn in non-O&G exports was mostly due to metals, aluminium and steel, in particular, screening both by the rise in metal prices and growing export volumes (the latter according to the monthly data).”

The turnaround in Russia’s trade regime has been dramatic. At the start of 2020 analysts were speculating that the current account would go into the red for the first time in almost two decades and indeed, it briefly dipped below the line for one month.

But now exports are booming and Russia has continued to reduce its dependence on oil and gas exports, although both those categories are doing very well at the moment on the back of sky-high prices for gas and $80-plus prices for oil. Oil and gas earned $61.9bn in exports in the third quarter of this year but that was slightly less than the $72.9bn earned by everything else.

“The $40.8bn current account surplus increased net foreign assets by $26bn (of mostly corporates in the form of direct investment and trade credits) and foreign reserves by $12.9bn (the rest is errors and omissions),” Isakov said. “Another $16.7bn of the increase in foreign reserves came through the [IMF’s] SDR allocation, which enlarged the CBR's foreign liabilities accordingly.”

The rapidly improving state of Russia’s trade regime has already had a visible knock-on effect on the ruble, which has strengthened considerably and is one of the world’s best performing currencies this year.

“We believe the report shows that we can expect a notable revision of the balance of payments CBR's July projections: from $88bn, it could shift up to $110bn-$120bn. We expect the current account strength to carry over into 4Q21 (supported by both commodities prices and growing export volumes), which we see as a positive development for the RUB,” said Isakov. “Our forecast for the full-year surplus is $115bn-$120bn, which, if our estimates are correct, would exceed the 2018 historical high (and adds to the similarities between 2021 and 2018).”