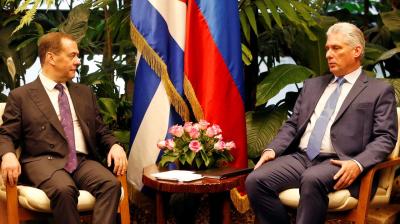 Cuba is running out of fuel as the US blocks partners from exporting oil from Venezuela to the island state
By Jenifer Delay of Newsbase October 10, 2019

Cuba has been caught in the cross fire of the row between the US and Venezuela on which is relies for fuel imports. The island state has been suffering sever fuel shortages in recent months as shipments from Caracas dry up. Russian Prime Minister Dmitry Medvedev paid a visit to Havana last month and promised to help as part of its global showdown with Washington, but that help is at an early stage and Cuba is still living hand to mouth.

The fuel shortage situation recently reached a critical point. On September 11, Cuba’s government said that it had not been able to procure enough gasoline, diesel and other petroleum products to meet demand for the rest of the month. It imposed new austerity measures, such as encouraging travellers to use animal-powered vehicles, and blamed US sanctions on Venezuela for the crisis.

Havana’s criticism of US policy was not misplaced. In its drive to penalise Caracas, Washington has been discouraging investment in Venezuelan oil and gas projects. Under the stricter sanctions regime imposed in January, it has sought to dissuade commodities traders, service companies, transport providers and other industry players from co-operating with Venezuela’s national oil company (NOC) PdVSA. This has caused problems for Cuba, since PdVSA has for some time been the main supplier of refined fuels to the island state.

In early October, though, relief appeared to be in sight. Eight Venezuelan tankers arrived in Cuba, bringing enough crude oil and petroleum products to ease shortages and boost refinery runs.

The deliveries came around the same time that Russian Prime Minister Dmitry Medvedev began a two-day visit to Cuba. During his time in the country, Medvedev visited a field where Zarubezhneft, a state-owned Russian company, is collaborating with the Cuban NOC, Cubapetroleo. He also spoke with President Miguel Diaz-Canel and other Cuban officials about plans for improving energy efficiency and co-operating on additional oil development projects.

These shows of support from two long-time allies probably lifted the spirits of officials in Havana. Even so, Cuba is probably heading for more fuel shortages.

For one thing, Venezuela’s ability to deliver sufficient volumes of fuel on a regular basis is very much in doubt.

As mentioned above, PdVSA is under a significant amount of pressure because of the US sanctions regime. Because of the trade restrictions, the Venezuelan company is having a hard time borrowing money, chartering tankers and taking other steps that might facilitate fuel shipments.

As Francisco Monaldi, a Latin American energy expert at Rice University’s Baker Institute, told Reuters last week, Caracas is having an increasingly difficult time finding partners for transactions related to the oil industry. “It’s getting harder and harder,” he remarked.

PdVSA has tried to find ways to overcome these challenges, and in some cases it has succeeded. It has reportedly been working with Rosneft, Russia’s largest oil operator, to move some of its production to markets around the world. And as Reuters reported last week, it resorted to using vessels from an ageing domestic fleet that had not departed from Venezuelan territorial waters for years to send crude and petroleum products to Cuba.

These tactics may have a limited life span. The domestic ships used to deliver fuel to Cuba are old enough that they will not be available indefinitely, and the US government is working to identify and penalise as many of PdVSA’s partners as possible. Just last month, for example, US Treasury Secretary Steven Mnuchin said that his department’s Office of Foreign Asset Control (OFAC) had imposed sanctions on four companies involved in transporting crude oil and petroleum products from Venezuela to Cuba.

Under these circumstances, Cuba should not expect Venezuela to meet all of its needs – certainly not every month, and not in full.

Russia to the rescue?

Meanwhile, Moscow is not exactly coming to the rescue either.

Medvedev did state last week that Russia wanted to help Cuba secure adequate supplies of fuel and develop its own oil and gas resources. But he did not say that the Kremlin was ready to offer any type of short-term relief or logistical assistance. For example, when asked by the Rossiya-1 television channel whether Russian ships could escort tankers heading for the island state, he replied: “I think we will find other ways to help Cuba get oil and petroleum products.”

He also indicated that discussions between Moscow and Havana were still in the relatively early stages, without much in the way of concrete plans. “We discussed this today and agreed that we would draft a work plan for energy supplies to Cuba, bearing in mind conventional energy sources, hydrocarbons and maybe some other available avenues,” he told Rossiya-1.

The prime minister and other Russian officials indicated that Moscow’s preferred approach was to continue participating in the development of Cuba’s upstream oil reserves. This is perhaps a logical approach, given that Cubapetroleo is already extracting enough crude from its own fields to cover 40% of domestic demand. But once again, it offers little relief in the short term. Exploration campaigns do not always succeed, and even when they do, oil operators usually need several years to bring new fields on stream.

In short, Cuba is still in a precarious position, and its long-time allies Venezuela and Russia are not likely to provide any long-term fixes any time soon.

Indeed, Moscow has indicated that its willingness to help Havana is limited. While in Cuba last week, Medvedev downplayed the close ties that the island state had to the Soviet Union during the Cold War, hinting that Russia was not willing to prop up another country.

“The Soviet Union is no longer there, and Cuba is changing, and there’s no question about any free help which would then have to be written off,” he remarked. “All our relations are very pragmatic. Although they are friendly in nature and based on a historical past, they are nevertheless relations between modern states. They should be mutually beneficial.”

Caracas, for its part, is likely to take a more friendly stance, especially in light of the ideological similarities between the governments of Venezuela and Cuba. Even so, this will not necessarily take the form of concrete aid, since sanctions are making ships hard to find, even in the face of socialist solidarity.

This article is from Newsbase’s LatAmOil monitor, a bne IntelliNews sister company that produces weekly reports on the oil and gas sector in the former Soviet Union countries.