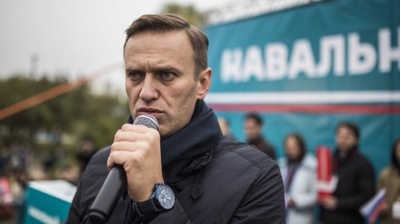 Alexei Navalny has been sentenced to a further 9 years in jail on charges of fraud and insulting a judge. He claims that all charges have been fabricated. / Image: bne IntelliNews.
By Theo Normanton in Moscow March 22, 2022

Russia’s most prominent opposition figure and a vocal detractor of Vladimir Putin has been found guilty on charges which he says are trumped up. After being convicted of embezzling from his own fund and insulting a judge, Navalny was handed a sentence of 9 more years in jail.

On the same day that Navalny was convicted, the investigative team from his Anti-Corruption Foundation released a video claiming that a superyacht called Scheherezade worth over $700mn is owned by President Vladimir Putin.

Measuring 140 metres and registered to an anonymous offshore company from the Marshall Islands, Scheherezade is the largest yacht in the world whose owner is unknown, according to investigative journalist Maria Pevchikh.

The yacht has six decks, two helipads, a salon-spa, saunas, and a swimming pool with a retractable cover which doubles as a dance floor. It is currently berthed in the port of Carrara in Tuscany.

By checking the crew list, Navalny’s team was able to ascertain that almost half of the 23 crew on board the boat had connections to the FSO – the Federal Protective Service of the Russian Federation – which Maria Pevchikh describes as “a militarised state agency responsible for the security and wellbeing of Vladimir Putin personally.”

Information from a leaked credit score database showed that one of the named crew members listed his official employer as the FSO when applying for a loan.

The Anti-Corruption Foundation also claims to have confirmation from one of Scheherezade’s crew members that the yacht belongs to Putin.

Navalny’s team from the Anti-Corruption Foundation called for Scheherazade to be seized and for its ownership structure to be investigated.

Navalny’s Anti-Corruption Foundation has investigated a host of wealthy Russians in relation to allegations of corruption, publishing many of its reports as videos. A video linking a palace on the Black Sea coast to Putin was viewed over 50mn times in the two days after it was released in January 2021. It has now been viewed over 120mn times in total.

Alexei Navalny was poisoned with a nerve agent in 2020, which he blamed on the Kremlin. Upon his return to Russia, he was sentenced to three years in a penal colony for violating parole while in hospital.

His latest trial took place not in a court, but in the penal colony, and journalists were not allowed in the room where the trial was held, according to Navalny’s spokesperson Kira Yarmysh. Navalny denies the charge of embezzling $19,000 from his own foundation, including on two occasions when he was already in prison.

The second charge – of insulting a judge – was based on the use of terms such as “This case is fabricated” and “Oh my God”. An expert evaluation of the latter comment deemed that it was not the words which were offensive, but the tone.

The latest sentence will likely see Navalny jailed for over 10 years, and moved to a high-security prison far from Moscow.

In his final speech to court, Navalny told the prosecution that “They can’t jail everyone. You could ask to give me 113 years – you won’t scare me or those like me. Russia is a big country with a lot of people and not all of them are ready to give up their future and their children’s future in as cowardly a way as you have.”

Navalny’s trial began on the same day as Russia’s invasion of Ukraine. While in jail, Navalny called for mass protests via his lawyer in response to the Kremlin first publishing the numbers of Russian casualties in the war.

Kremlin preparing for a protracted conflict by putting Russian economy onto a war footing
Russia’s industrial output decline slows to only 0.1% in August
Putin's popularity remains high, but even after a hit in September it is still at 77%