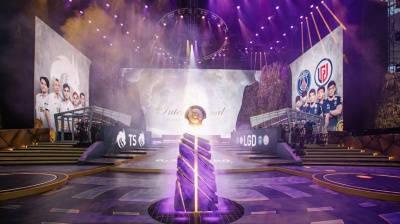 On 17 October, Russia’s Team Spirit triumphantly lifted the Aegis of Champions. The team of five youngsters – the oldest of them only 23 years of age – looked somewhat out of place, dwarfed by Romania’s biggest stadium. The International 10 is no ordinary sporting event: it is the world championship for multiplayer online battle arena video game Dota2, and comes with an $18.2mn prize – the biggest in eSports.

For seasoned cybersports fans, Team Spirit’s ascendency was entirely unexpected. After a series of embarrassing losses during the regular season and the open qualifiers, few had Team Spirit down even to make it into the finals. Their unlikely victory drew acclaim at home; the team appeared on Russia’s Channel One the same evening, and even received a congratulatory message from President Vladimir Putin. Perhaps even more surprising than the team’s sudden rise to fame, though, is the report by online newsletter The Bell that an “extensive skins empire” could be among the team’s backers.

Skin in the game

Team Spirit would not be the first team to have high-powered sponsors. Their opponents in the Grand Finals, Chinese team LGD, are supported by French football club Paris Saint Germain, while America’s Evil Geniuses are sponsored by Monster Energy Drinks. Unlike the other big Russian Dota2 teams, however, Team Spirit does not have a strategic partner. Virtus Pro, for example, belongs to VK (formerly Mail.ru Group, the leading Russian market player for gaming), while Gambit is owned by Russia’s largest network operator MTS. Team Spirit’s official backers, on the other hand, consists of a disparate group of unnamed individuals who would hardly seem able to recruit the kind of pricey talent required to keep up with the other teams.

While the team’s CEO, Nikita Chukalin, refuses to answer questions about the identities of Team Spirit’s financiers, a hint can be gleaned from the team’s website domain, belonging to Onmoon.ru, according to The Bell. Among the other sites of which IT company Onmoon owns the domain is csgo.ru, a gaming information hub integrated with one of the largest skins markets in the world: market.csgo.com.

Skins are graphics which change a character’s appearance (or that of their weapon) in video games. They are bought through the game for real money, and cannot officially be re-sold. Marketplaces for skins have nonetheless sprung up over time, such as Russian platform CS.money and Ukrainian DMarket, where trades are notionally cash-free, and money does not change hands. In 2018, when the market for skins was at its highest, a study by Juniper Research found that the global skins industry was likely to see a total spend of $50bn by 2022.

While various attempts at regulating third-party sites have been made, including some court cases against bloggers promoting them in the US, the black market regularly outpaces game owner Valve. This has led to the growth of a gambling market which uses skins as a virtual currency (which can be wagered on the outcome of an upcoming gaming battle on a streaming site, for example), as well as a good deal of scams, of which children are often the victims.

The Bell reports that csgo.com’s skins' marketplace is worth upwards of several million dollars a month, not including income from another category of item called loot boxes, which also bring in a considerable sum of money. Much of the prize money for The International 10 comes from money spent in the game by players worldwide, including on skins, so reports of a potential skins market backing the winning team adds an element of circularity which some commentators find suspect.

Team Spirit’s current squad was assembled less than a year ago. Only one member had taken part in The International before – the others were little more than skilled amateurs. PSG.LGD, the team’s opponents in the grand final, had reached that stage of the tournament twice already in its lifetime: the probability of Team Spirit’s victory seemed vanishingly small. Indeed, at the beginning of The International 2021, the odds on Team Spirit to win the Aegis of Champions were 29:1. Anton Cherepennikov, the co-founder of eSports holding company ESforce, won almost $44.5mn on these odds, the Bell reports.

For many, the improbable win is symbolic, coming as it does 10 years after the last time an Eastern European team won the tournament (Ukrainian team Na’Vi in 2011). Team Spirit’s win has therefore created a talking point in Russia around the growth of gaming as a discipline. Russian presidential spokesman Dmitry Peskov commented that ‘although it wasn’t a sport before, [gaming] can now lay claim to being a legitimate sporting category.’ Even Deputy Prime Minister Dmitry Chernishenko has agreed that the popularity of eSports is flourishing.

In spite of this, though, ownership of gaming teams remains a largely unprofitable business. Russian team Virtus.Pro has lost millions of dollars for its owner (IT company VK) through overvaluation, and VK has repeatedly attempted to offload the team onto another buyer, but to no avail. As Team Spirit walks away from the current championships with the $18mn cash prize, owners of defeated teams will be left hoping that eSports are able to develop a financial framework as sturdy as that of the conventional sports which it hopes to imitate.

Dozens of plants across a diverse range of industries such as steel, aluminium, fertilisers and the power industry have been forced to close up shop as sky-high gas and power prices make their businesses lossmaking.