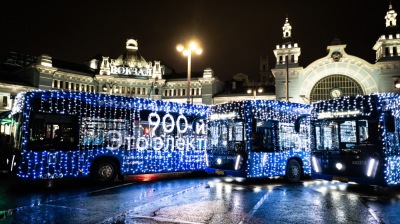 Moscow has launched its 900th electric bus in time for the holidays / wiki
By bne IntelliNews December 21, 2021

The 900th electric bus hits the streets of Moscow as the holiday season starts, suitably decked with festive lights.

The jubilee e-bus decorated with lights will operate in the south of the city as part of the City of Moscow’s plans to upgrade its fleet of electric buses and reduce emissions.

The vehicle was assembled at the innovative SVARZ eco-plant by Russian truck-maker Kamaz, which was opened in April. This electric bus has become the 300th vehicle purchased with the funds from green bonds issued by the city of Moscow.

Today the electric buses are running on 66 bus routes in the city with a total length of almost 800 km. This year electric buses transported more than 77mn passengers, and more than 150mn people were carried in the three years of the operation.

Moscow has been actively developing its transport infrastructure and in December opened several new metro stations as part of a system-wide overhaul.

“New Year's electric buses have been operating on the streets of Moscow for the fourth winter. This year, the Mayor of Moscow made a special gift – along with decorated metro train, trams and buses, the jubilee 900th electric bus will also start operating. This is the 300th e-bus purchased with the funds from the green bonds. The decorated New Year electric bus will operate in the south of Moscow. In total, over the entire period of operation, our electric buses have transported 150mn people, more than 77mn in 2021. In the coming year, we also plan to increase the quantity of eco-transport in the city. This, in turns, will help to reduce the amount of harmful emissions and significantly improve the environmental situation in Moscow,” said Maksim Liksutov, the Deputy Mayor of Moscow for Transport.