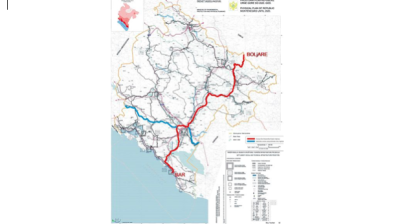 / Government of Montenegro
By Denitsa Koseva in Sofia July 19, 2019

Montenegro's expenditures on the construction of the first priority stretch from Smokovac to Matesevo of the key Bar-Boljare motorway will amount to €895mn, up by 10% from initial estimations, Transport Minister Osman Nurkovic said on July 19.

Construction of 44km Smokovac-Matesevo stretch was launched in April 2015 and should be completed by mid-2020. It is funded mainly by a loan from China’s Exim Bank and the government should repay the first tranche of $33.7mn in July 2021.

To pay for the construction, Montenegro signed a loan deal with China’s Exim Bank for around €809mn in 2014. The loan has 20-year repayment period, five years grace period and a 2% fixed interest. Podgorica started drawing funds in 2015.

According to Nurkovic, the additional works will cost €85mn and concern the construction of tollbooths, as well as the motorway's electrification and water supply, Nurkovic said in response to a question in parliament.

China’s CRBC, which is building the Smokovac-Matesevo stretch, has already expressed interest in the second stretch and has indicated it was ready to enter a public-private partnership for its construction.

However, the International Monetary Fund has said that Montenegro should proceed very carefully with the construction of the Bar-Boljare motorway as its economic benefits are uncertain.

The construction of the first stretch of the highway has put Podgorica in very difficult financial position, increasing its debt to around 70% of GDP and the government has indicated that could revise its plans if further studies confirm the project is not economically viable.

The 169-km Bar-Boljare road project is significant in comparison with the size of Montenegro's economy carrying both, benefits and risks. In the past few years, it has pushed up the economic growth, but left Podgorica with little options to invest in other significant infrastructure projects.

Meanwhile, the anti-corruption NGO MANS has many times voiced concerns about the project, claiming it has given room for corruption and lacks transparency. Also, MANS has several times warned that CRBC was not building the motorway stretch with proper materials.

The latest concern was that the construction of the stretch has seriously polluted the Tara river. MANS claims it was devastated and in June 2019 filed a claim against the tourism minister Pavle Radulovic and transport minister Osman Nurkovic due to alleged environmental devastation associated to the Smokovac-Matesevo construction.

MANS claims that CRBC is depositing waste into the riverbed and on the banks of Tara river and, despite warnings, the government has not taken any steps to prevent that.