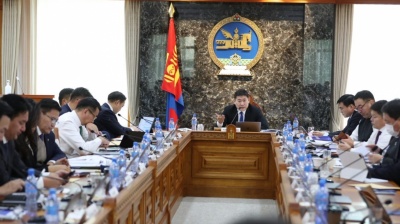 The Mongolian government in session. / cabinet.gov.mn
By Anand Tumurtogoo in Ulaanbaatar December 10, 2022

The sixth day of the Mongolian street protests against the “coal mafia”, a group of state officials and executives who have apparently robbed the public purse of billions of dollars, also brought more concessions from the government in terms of investigating the affair.

As protesters again on December 9 gathered in front of Government Palace in Ulaanbaatar to demand accountability, the government announced that it would start giving daily briefings on the coal theft scandal. The Cabinet secretariat, meanwhile, said nine contracts related to the state mining company at the heart of the affair, Erdenes Tavan Tolgoi (ETT), would be declassified and made public. Henceforth, the government would not enter into any non-public agreements on coal export sales, officials also pledged. The confidentiality of non-disclosure agreements (NDA) would be terminated.

The secretariat also announced that parliament will form a temporary committee to probe the coal theft case.

Statements from the secretariat also alluded to claims that the protests—which on December 8 led to some instances of traffic flows in central Ulaanbaatar being obstructed—were incited by political and business groups who were involved in the coal mafia. "The government will continue to fight these thugs," the secretariat said.

Most of those who will be investigated in relation to the thieved coal and related earnings on coal exports to China are Mongolian customs officials. Among those officials is Asralt Batbold, head of the General Directorate of Customs, who, shortly after acknowledging the allegations, resigned from his post.

It is unclear if any of the nine contracts dated from 2019 to 2022 implicate any of the companies involved with ETT in terms of missing coal and coal export monies. Nonetheless, these contracts will be turned over to the National Audit Office for further investigation, while conflict of interest issues are to be verified and transferred to the temporary parliamentary committee.

The contracts were signed based on recommendations in June 2019 of the National Security Council (NSC), which consisted of former president Battulga Khaltmaa, Speaker of the Parliament Zandanshatar Gombojav, and former prime minister and current president Khurelsukh Ukhnaa.

One shocking revelation is that former MP Enkhbold Luvsan raised the coal theft case in parliament as far back as 2018.

On December 8, Enkhbold provided in-depth details about the affair to local TV station TV8. He said that he first discovered information when attempting to help a former customs official avoid prison time. This customs whistleblower was eventually sentenced to two and a half years in prison, while trying to make the coal scandal public.

Enkhbold recounted that when he raised the issue in parliament four years ago, he encountered opposition from within his own party, the Mongolian People's Party (MPP).

One established claim in the affair is that when 379,000 tonnes of coal went missing in 2010-2011, inspectors at the time determined that 3,758 coal haul trucks were registered as "empty" at customs.

Enkhbold also told how, when he was a member of parliament in 2016 and a member of the parliamentary standing committee on justice in 2017, he asked the prosecutor general about the claimed coal theft, but the prosecuter general replied: "It [the case] is closed because the statute of limitations has expired."

Nyambaatar Khishgee, the Justice and Internal Affairs Minister, gave a briefing on some details of the coal theft and how law enforcement would proceed with its investigation. The statute of limitations will be lifted in all cases related to the coal theft, with investigators to primarily look into discrepancies between local and foreign customs data, said Nyambaatar.