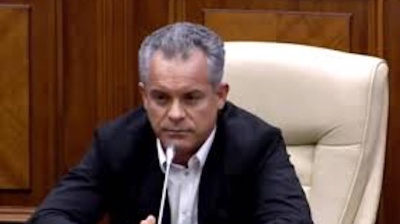 Vlad Plahotniuc was Moldova's most powerful politician from 2017 to 2019.
By Iulian Ernst in Bucharest October 31, 2022

Vlad Plahotniuc, the Moldovan oligarch who ruled from 2017 to 2019 through his political vehicle the Democratic Party, has announced plans to organise a political force with the aim of taking back power in the country.

Plahotniuc was forced to flee the country by an unexpected alliance formed by the pro-EU Party of Action and Solidarity (PAS), which is currently in power, and the Socialist Party (PSRM), in June 2019

He announced his political comeback after the United States Treasury through its Office of Foreign Assets Control (OFAC) imposed sanctions on nine individuals including Plahotniuc, on October 26. This means Plahotniuc's assets in the US were frozen — but not whose in other countries.

The US authorities designated Plahotniuc “for bribing law enforcement officials, reflecting his longstanding efforts to capture and corrupt Moldova’s judicial and law enforcement institutions while using his wealth and political influence to undermine political rivals and rule of law in the country.”

These are harsh words, but they are rather broad and general terms that still have to be proven by the Moldovan prosecutors who speak of $100mn siphoned off “in favour of” Plahotniuc from private Moldovan banks.

“The period of tolerance has ended for the anti-Plahotniuc governments. They demonstrated everything they could. Now it's my turn to organise a political team again, to return to power and demonstrate how to lead a country in times of crisis and how to rule efficiently and with concrete results,” Plahotniuc said in an interview given to Tribuna.md on October 28.

Plahotniuc's return — to politics and the media, but not necessarily to the country — coincides with a visible deterioration of public sentiment in Moldova, driven by economic hardship. Inflation exceeded 30% y/y and energy prices are still rising.

The rallies against the government continued on the weekend of October 29-30, organised by the fugitive businessman Ilan Shor and, separately, by the Communist Party (the two opposition forces claim that they are operating independently).

The Anticorruption Prosecution Office (PA) sent to court a first file against Plahotniuc at the beginning of September. Recently, the Constitutional Court cleared the file, rejecting the objections by Plahotniuc’s lawyers as regards a new law allowing trials in absentia.

There is a 30-day arrest warrant on the name of Plahotniuc, issued by Moldovan judges in May 2020.

Interestingly, the file against Plahotniuc was announced for the first time in May 2020 by the suspended head prosecutor of Moldova, Alexandr Stoianoglo. Stoianoglo was suspended from the post last autumn by prosecutors backed by President Maia Sandu’s PAS.

"We have indisputable evidence, which indicates that the citizen Plahotniuc is the beneficiary of the money, obtained in the form of a loan from Savings Bank of Moldova (BEM), through the Shor group [of companies], consequently covered by the financial resources of the National Bank, in total, over $100mn," Stoianoglo stated at that time.

Stoianoglo is now judged for three counts, among which the most relevant is related to dropping the accusations against Veaceslav Platon — one of Plahotniuc’s rivals and a businessman allegedly involved in Moldovan bank frauds and the Russian Laundromat. Given the circumstances, the prosecutors may now be more interested in hearing Platon's statements against the former Democrat leader Plahotniuc.

Sandu has so far avoided dismissing Stoianoglo, even after her PAS prepared all the legal pre-requisites for this. Sandu said she was waited for the court ruling.

Notably, Platon was not designated by OFAC as a subject of sanctions, along with Plahotniuc and Ilan Shor (the main targets of the sanctions, besides some Russian consultants of former president Igor Dodon). Platon has constantly accused Plahotniuc of being behind the major bank frauds that surfaced in 2015. He was convicted by Moldovan judges, in 2017, for alleged bank frauds amounting to around MDL800mn (€60mn) during the regime of Plahotniuc, who, according to OFAC, “has bribed law enforcement officials … while using his wealth and political influence to undermine political rivals.”

Currently, the arrest warrant issued for Platon by Moldovan judges is based on the request of some Russian prosecutors investigating the Moldovan businessman for his alleged involvement in the Russian laundromat.