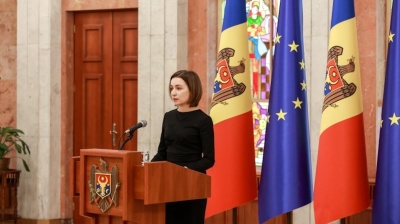 Security is being stepped up in Moldova after Russia launched a full-scale military offensive in neighbouring Ukraine in the early hours of this morning, President Maia Sandu announced on February 24.

Fears are growing in Moldova that the country could be the next target for Russia, and Sandu announced that the interior ministry will intensify its patrol efforts to guard against "provocations".

Residents of the Russia-backed separatist republic of Transnistria in eastern Moldova and towns in territory controlled by Chisinau reported hearing explosions earlier today. Social media was flooded with reports of loud blasts, which were initially thought to have been an attack from within Transnistria, where Russia has around 1,500 troops, on Ukraine. A video described as a rocket attack from Transnistria has been circulating on Twitter, but its authenticity has not been confirmed.

The Moldovan Ministry of Defence later issued a statement saying that no attacks had been launched from the rebel region.

“In the context of the news circulated on social networks about the attacks on the territory of the Transnistrian region against Ukraine, the Ministry of Defence announces that this information is false,” the statement said.

The explosions heard within Moldova were most likely the bombing of Podolsk, a Ukrainian city that lies just 20km from Ukraine’s border with Transnistria. Ukraine’s Ministry of Internal Affairs said shortly after 9am local time that six people had been killed and another 19 were unaccounted for following a Russian attack.

In recent days there has been speculation that the Russian forces stationed in Transnistria — which the Moldovan government has been trying for years to evict — could be used to help Russia create a land bridge to the Ukrainian port of Odessa, cutting off Ukraine’s access to the Black Sea.

There are also concerns Russia may use its foothold in Transnistria to put pressure on Chisinau.

Moscow has backed the separatists in Transnistria for decades, with political, military and economic support, but has held back from recognising the small territory as independent.

However, after Russia recognised the two separatist republics of Donetsk and Luhansk in the Ukrainian Donbas region, Transnistrian leaders reportedly visited Moscow on February 22 to request recognition for their self-declared republic too.

Like Ukraine, Moldova has a western leaning government and president, after Maia Sandu and her Party of Action and Solidarity won landslide election victories in 2020 and 2021 respectively. The country has a substantial Russian minority, concentrated in Transnistria but also present in other parts of the country.

Sandu addressed Moldovans on the morning of February 24, and said that all state institutions have been transferred to a “special regime” following the outbreak of hostilities in Ukraine.

“Russia has started hostilities against Ukraine, grossly violating the norms of international law. The international community has unanimously condemned this act of aggression,” Sandu said, according to a statement from the presidency.

“An emergency commission meeting will be convened today to adopt a package of measures to overcome this crisis and humanitarian challenges. The interior ministry will step up patrols to prevent possible provocations,” the president added.

M&A in Emerging Europe fell by 20% to €32.93bn in 2022
Moldovan ex-president Dodon accused of trying to flee the country
Russian lawmakers warn Moldova’s Nato aspirations may lead to its destruction