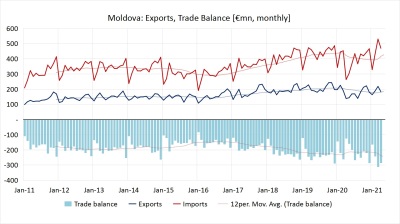 In the first quarter of 2021, Moldova supplied 23% of the overall demand for consumption and investments from (net) imports, up from 20% in the same period last year.

In volume terms, exports shrank by 12.3% y/y while imports increased by 7.1% y/y. The price terms improved significantly in favour of Moldovan exporters: the average export prices rose by 14% y/y, double the 7% increase in the price of imports. However, the quarter ended with imports nearly twice as wide as exports: MDL29.5bn versus MDL15.2bn. Wage remittances have historically financed this wide trade gap, besides grants from the country’s development partners.

For the whole year 2020, the share of imported resources in total domestic demand was only 18%, but using nearly a fifth of resources from imports is far from sustainable for the country’s external balance. The impact of the balance of payments (BoP) will become visible when the National Bank of Moldova publishes Q1 BoP.

In the meantime, the statistics office published the foreign trade data for April, which brings no good news. Exports again rose by 46% y/y to $218mn, but imports leaped up nearly twice as fast, by 96% y/y to $561mn. With imports already roughly twice as high as exports, the sharp rise in imports resulted in a trade deficit 2.5 times bigger compared to April 2020.

The annual comparisons might not be particularly relevant due to the lockdown last April. But compared to April 2019, Moldova’s exports edged up by a slim 1.3% while the imports advanced by 8.8%, resulting in a trade gap that was 14% bigger. Although the figures are not as dramatic compared to the annual change, they still reflect a steady deterioration of the country’s external balance.

January-April data reveals that the exports of domestic goods (as opposed to re-exported goods) were rising slower than the average.