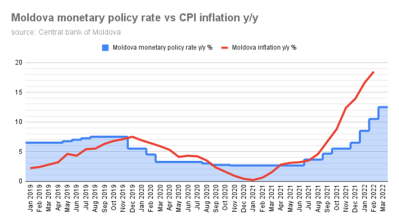 The National Bank of Moldova (BNM) decided to increase the refinancing rate by another 2pp to 12.5% on March 15, one month after a similar rate hike one month earlier.

The BNM noted the significant deterioration of the inflation outlook compared to the latest forecast in February, The decision aims to alleviate inflationary pressures, anchor inflationary expectations, protect the deposits and savings of the population.

At the same time, the decision is aimed at tempering the effects associated with the crisis in the region from the perspective of reducing pressures on the depreciation of the national currency due to increasing current account deficits and trade balance and is aimed at reducing capital inflows.

Headline inflation surged to 18.5% in February, though, and the central bank said in February that it expected it to remain above 20% during the second half of the year.

BNM noted that “the risks and uncertainties at global, regional and national levels generated by the conflict in the region are rising” and concludes that the economic outlook for the country in the context of these events is precarious.

Under the pressure of an “unprecedented situation”, the national economy is subject to structural changes.

As regards inflation,  the escalation of the situation in the region which has led to a sharp acceleration in oil and natural gas prices, possible distortions in supply chains and increased demand outlines the risk of a sharp positive deviation in both the short-term inflation forecast (first quarter of 2022) and the medium-term inflation forecast.

As regards the broader macroeconomic outlook, the BNM sees the medium-term evolutionary trajectory of GDP being affected by the risks and uncertainties associated with the situation in the region, mainly determined by the duration and magnitude of the war and possible escalations. It identified the impact on increasing the consumption of the population due to refugees on the one hand and the contraction of remittances on the other.