MEPs say democracy and fundamental rights under threat in Hungary 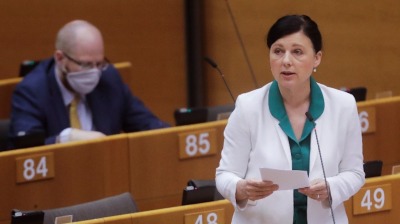 Vice-President Vera Jourova say EC is monitoring the rule of law in Hungary very closely
By Tamas Szilagyi in Budapest May 15, 2020

Democracy and fundamental rights are under threat in Hungary, said MEPs during the debate on Hungary’s rule of law at the European Parliament (EP) on May 14. Prime Minister Viktor Orban did not attend the meeting, saying he was too busy fighting the pandemic. European lawmakers urged the Commission and the Council to proceed with the Article 7 procedure initiated by the Parliament.

In its resolution of 17 April, the EP already stated that the decisions in Hungary to prolong the state of emergency indefinitely, to authorise the government to rule by decree, and to weaken the parliament’s oversight, are "totally incompatible with European values".

At the end of April European Commission Vice-President Vera Jourova said Hungary's emergency measures did not warrant EU scrutiny yet. During Thursday’s debate, she took a slightly different approach and criticised the state of Hungary’s press freedom.

Jourova said the European Commission has not yet launched infringement proceedings against Hungary but is monitoring the rule of law very closely. She stressed that the biggest concern about the coronavirus law is that it’s not for a specific period of time.

Jourova also said that the planning for the 2021-2027 budget had not yet been completed, and that the proposal to suspend EU funding if a member state seriously and systematically violated the rule of law and democracy was still on the agenda.

Several MEPs called on the European Commission to finish scrutinising the legal changes and open infringement procedures against Hungary. They specifically asked for payments to Hungary to be stopped, in the framework of the new financial perspectives and the recovery plan, unless the rule of law is respected. They also criticised the passive attitude of the Council and insisted it moves on Article 7 initiated by the parliament.

French MEP Gwendoline Delbos-Corfield, rapporteur for the Article 7 procedure, voiced concerned over amendments of the Hungarian criminal code in the emergency law the allowing for up to five years in prison for those who spread "fake news" about the pandemic. The arrest of private persons in relation to the new law has also emerged during the debate.

In a matter of 24 hours, two men have been detained for "fearmongering" after sharing a Facebook post critical of the government. On Wednesday a local leader of opposition in the southern town of Gyula was detained police over a Facebook post. Police came with a search warrant for the physically disabled man, who also had diabetes. His home was searched and his laptop, mobile phone and a pendrive were confiscated and had not been returned yet.

Prime Minister Viktor Orban turned down the invitation by EP president David Sassoli to take part in the debate. She delegated Justice Minister Judit Varga to the plenary session, but the EP did not give her permission to give a speech. Instead, Varga posted her speech on her social media site. In it, she defended the government’s special measures in response to the coronavirus epidemic saying it fully complied with the European Union’s fundamental principles.

Government officials and Fidesz MEPs slammed Thursday’s debate calling it a “witch hunt and a show trial” against the country.