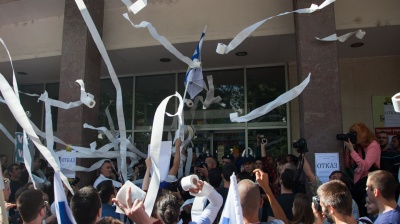 Belgrade mayor Sinisa Mali claims he was attacked with a pole when he was involved in an altercation with Don't Drown Belgrade activists on the morning of July 18. The small group of protesters had gathered in front of the Belgrade assembly to hand him and city assembly president Nikola Nikodijevic symbolic letters of dismissal.

Activists are frustrated because the government failed to sack the officials responsible for the controversial demolition of buildings in Belgrade's Savamala district, an area designated for the €3.2bn Belgrade Waterfront project. Almost three months after the event, no action has been taken, and Mali is under pressure from protesters to resign.

The escalation of the protesters’ anger and their aggressive behaviour towards the mayor could result in the protests losing supporters because most of the thousands of people who took part in previous protests simply want those responsible for the demolitions to be sacked, and would not support any kind of violence. However, protesters said in an emailed statement that they were attacked by private security officers backed by police and did not start the violence.

According to news agency Tanjug, an unidentified object was thrown at the mayor, and a man lunged at him during the protest. One policeman is in hospital after sustaining minor injuries.

“Around 50 people, who attacked me with a pole, who want to beat me up, are asking for my resignation. I will not resign because of people like that, for the sake of the majority of citizens who voted in the local elections in favor of this policy," said Mali, who was visibly upset.

A small crowd had reportedly gathered outside the building on the morning of July 18. Pictures from the protest show demonstrators waving banners and throwing toilet rolls.

Protesters shouted "Thieves!" at Mali and Nikodijevic as they approached the building. This later turned into scuffles at the entrance to the building, when the police started pushing citizens, some of whom were elderly, back from the door. The protesters then began to shout "Killers!" and, "Who are you protecting?".

According to local media the situation calmed down a few minutes later.

Mali said he would not resign and that he planned to continue with Belgrade Waterfront, a joint project of Serbia’s government and the United Arab Emirates’ Eagle Hills.

"These people are fighting against Belgrade Waterfront. They do not like that project, and we accept that, but that project will change Belgrade and Serbia and we are fighting for every job. This will be the case for as long as I am at the city's helm,” he said.

However, Dobrica Veselinovic, a representative of the initiative, denied that its activists had attacked Mali.

"No. That did not happen. We didn’t attack him, we were staying there to hand him the dismissal letter. He was protected by the police and private security. There wasn’t violence," Veselinovic said, Tanjug reported.

According to Veselinovic, Mali refused to accept the letter so protestors had to glue it on the door of the building.

However, the initiative won’t give up its demands, Veselinovic said.

Reacting to the incident, Minister of Interior Affairs Nebojsa Stefanovic said that criminal charges will be filed against people who attacked the mayor, city aldermen and policemen during the protest.

“Members of the Don’t Drown Belgrade initiative tried to stop the mayor and aldermen from entering the building and when they couldn’t, they tried to hit them with banners and the poles on which their banners were carried. Multiple objects were thrown at policemen,” Stefanovic said. He added that there were numerous recordings of the incident and called on the public not to “relativise” what had happened.

Five mass protests have so far taken place in Belgrade, with around 10,000 turning out at the most recent, on July 13.

The demolitions occurred on the night of April 24-25, immediately after the general election when a group of masked men demolished several sites in Hercegovacka and Mostarska streets in Savamala. Citizens who witnessed the demolition claim they were treated violently by the masked men and that the police did not respond to their calls for help.

Previous protests took place on June 25, June 11, May 25 and May 11. At all the protests, citizens called on Mali, Stefanovic and acting Belgrade police chief Vladimir Rebic to resign.

Asked which top city officials were responsible for the April demolition of buildings in Herzegovacka Street, Mali said he "does not know", but denied that either he or any other official were running away from responsibility.

On June 8, Vucic, who has been mandated to form the new government, accused top Belgrade officials of being behind the demolition of the buildings and said those responsible would be brought to justice. However, no further action appears to have been taken. In addition, Vucic said the construction of Belgrade Waterfront would move forward and that he personally will fight for it.

Daily Vecernje Novosti reported on July 6, quoting several unnamed sources close to the local government that Mali was ready to resign in the next few days. According to Vecernje Novosti, Mali was to step down after Serbia's new government had been formed, but this process has been delayed.

Belgade Waterfront is being built on a large area near Belgrade fortress and the confluence of the Sava and Danube rivers, where Savamala district is located. Savamala has undergone a revival in recent years, becoming a new cultural hub. It is the location of many of Belgrade’s most prominent clubs and bars, and is popular with foreign tourists. Belgrade residents who remember the district as a trading centre before the Second World War are among those opposed to the project. The close ties between the government and the UAE firm have also met with resistance.