Kazakhstan will hold its presidential election on April 26, almost 18 months earlier than previously planned. President Nursultan Nazarbayev said that the early election is necessary to end the uncertainty over succession and to create a greater sense of national unity at a time when the country faces a sharp slowdown in its economy. Both reasons are certainly valid; ever since the last election in 2011, the debate has been mostly about succession rather than how to boost investment and reforms, while the macro indicators are almost all in decline right now.

President Nazarbayev has been in charge of the country ever since independence back in 1991 and is not subject to any term limits. He should comfortably win the April election (he secured 95.5% of the votes at the last one) and is expected to reveal his preferred (eventual) successor early in his next term. Clear favourite for that nomination is the president’s daughter, Dariga (51 years old), and following her most likely her son, Aliyev, who is now only 40 and is precluded from the presidency until he becomes 50. So, assuming there is no attempt at a palace coup or a people’s revolt, it seems that the president’s political legacy should be safe for some time. That is something which is important not just for the president but for all of those who have benefited hugely from being part of the country’s so-called elite over the past 25 years.

And that’s the problem right there, and probably the key reason for calling the election early.

The economy is slowing and the country is certainly at risk of sliding into recession if the oil price were to fall below $50 per barrel for more than a few months, or Russia’s ruble was to move back towards the low point that it reached in mid-December. If that were to happen, then the government in Kazakhstan would be forced into deeper cuts than the 10% average budget cuts already announced and the devaluation of the tenge would also have to be much bigger than expected.

Central bank and other government officials have either denied a currency devaluation is “imminent” or are being deliberately vague on the issue. The fact is that, unless the oil price climbs back towards $80 per barrel and the ruble stages an equally impressive recovery, the tenge will have to be devalued by at least 25% in order to maintain the competiveness of the country’s manufacturing sectors and to prevent the budget deficit from ballooning. The economy cannot for long sustain a strong currency that only encourages people to cross the Russian border to buy cheaper goods. Over the last two months of last year, Kazakhs bought and imported over 50,000 new vehicles in Russia, which has forced the government to provide emergency aid to the country’s auto manufacturing sector.

Unlike in February 2014 when the Tenge was devalued by almost 20% in a surprise move, this time it is widely expected. Apart from spending money inside the Russian border, more than two-thirds of retail deposits in Kazakhstan were converted to a foreign currency deposit during the fourth quarter of last year.

The immediate danger is that this combination of a slowing economy – with all of the implications for inflation, wages, social payments and job security – and currency devaluation could lead to more public protests such as that which took place in the country’s oil rich region in 2011. That was directly linked to social inequality, even though it happened in a year when real GDP grew by 7.5%. That grievance is expected to get worse as the economy slides.

Last year real GDP in Kazakhstan grew by 4.3%. Retail sales was the main driver of that growth, rising by over 12%, and the consolidated budget ran a surplus equal to 3.2% of GDP. This year, because of the lower oil price average and the contagion from Russia, the government expects growth to slow to 1.5%. That is probably optimistic. If Brent were to average $55 per barrel, which implies a ruble-US dollar average of approximately RUB65 to the dollar, the growth in real GDP is expected to be no more that 0.5% and the consolidated budget would run a deficit equal to over 2% of GDP, even with the cuts already announced.

Kazakhstan’s problem, and reason why the government is so fearful of a public backlash against budget cuts and a devaluation, is that it suffers from the Russian disease of over-reliance on revenues from hydrocarbons. Its problem is actually a mixture of Russia and Azerbaijan problems in that, like the latter, it has not felt the urgency for change in the economy because it has been waiting for a big boost to hydrocarbon revenues to materially improve its financial fire-power and, therefore, investment options. In the case of the government in Baku, it is waiting for the doubling of gas export volumes to Europe from phase 2 of the Shah-Deniz gasfield, while in Astana the government has been waiting for oil to flow from the giant Kashagan oilfield, located just offshore in the Caspian Sea.

At full production that field is capable of doubling the country’s current oil export volume to close on 3mn barrels per day. That would mean over $33bn of additional oil revenue (at today’s price) to be shared between the producers and the national budget. The problem is that the project has been plagued with expensive delays and is now expected to start producing only in late 2016 or early 2017, ie. about 10 years late.

It’s not that the government is unaware of the need for reforms and economic diversification; over the past few years it has adopted no less than five major development programmes aimed at, eg. boosting the agriculture sector, creating a more diverse economy with greater wealth distribution, and substantially expanding and modernizing the country’s infrastructure network.

Of those targets the only area where there has been any real progress is in the transport infrastructure. The country has built or upgraded thousands of kilometres of roads and railroads, and has already seen a big boost in road freight transiting the country from China to Russia and to other Central Asian states. China has been a big investor in the country’s transport infrastructure, including the transport of oil and gas into its western province, as the Beijing government pursues its goal of creating a latter day silk road to Europe and the Middle via Kazakhstan and Russia.

But the success in the transport sector has not materially altered the economy or created any diversification. Over 30% of GDP is still linked to the oil and gas sectors today. Over 50% of last year’s budget revenues came from these two sectors, which also account for approximately 60% of the value of exports. All three of those numbers are very similar to their counterparts in the Russian economy.

The question for both portfolio and business investors is also similar to that being asked about Russia: “is this the crisis which finally shakes the complacency and leads to a more serious effort to attract investment, reform the economy and start to reduce oil and gas tax vulnerability?”

That brings us back to the reason why the president has called the election early, or rather leaves us with a question as to the real reason for the move: is it because the president fears the possibility of a public backlash against budget cuts, a worsening of economic conditions and the expected currency devaluation? Or, is it because he wants to get more serious about the development plans and needs to be rid of the distraction of succession in order to get the government and elites more focused on these projects?

Kazakhstan undoubtedly has huge potential for business development and for investors. True it’s population of just over 17mn is small, especially for a country the size of Europe. But it has a very sizeable mineral resource base and Kashagan will eventually start producing. It also has huge agriculture potential and is right up against the country with a growing appetite for both food and materials imports.

One of its biggest resources is its location, between China, which needs to export more efficiently and import ever-bigger volumes of raw materials, and Russia, Europe and the Gulf region. All it needs is social stability and political determination to get on with the job. Maybe this is the year it starts. 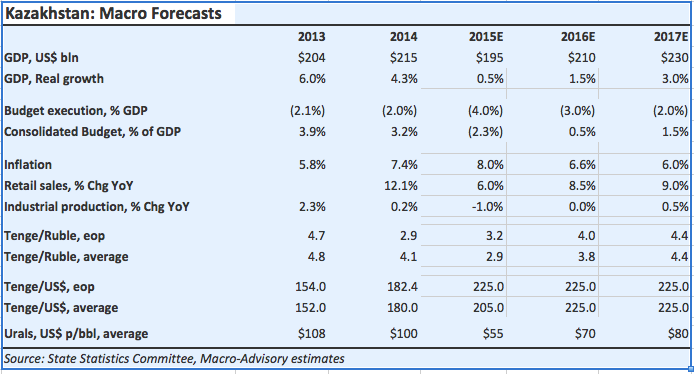