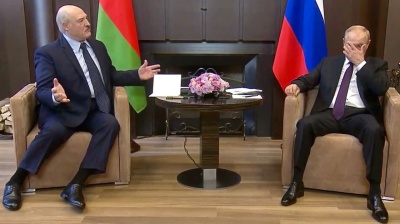 Embattled Belarusian President Alexander Lukashenko flew to Sochi in Russia and met with Russian President Vladimir Putin to ask for help. Much fun was had with the awkward body language on display, as Putin is well known for his dislike of Lukashenko.
By Ben Aris in Berlin September 14, 2020

Russia agreed to provide Minsk with an emergency $1.5bn loan, as the country is already running short of cash. As bne IntelliNews reported, the ATMs in Minsk have already run dry of dollars as the population have rushed to convert their savings into dollars in case of yet another deep devaluation.

Companies are also reportedly running out of money and have begun to delay wage payments, according to anecdotal accounts posted on social media. Ratings agencies warned that banks are coming under pressure and Fitch warned on August 28 that liquidity is drying up, exacerbating risks to the banking sector. That was followed by a downgrade of Belarusian debt by S&P at the end of last week as the country's risk profile deteriorates.

The drain on dollars saw the country’s international reserves drop by $1.4bn in August alone, down some 18% from $8.8bn prior to the outbreak of unrest. However, this is about a third of the country’s US dollar cash holdings and it cannot sustain such heavy outflows for long. About 80% of Belarus’ debt – including its domestic debt – is denominated in dollars. Russia has already offered Belarus debt relief on $1bn worth of debt that comes due now two weeks ago.

The new Russian loan is fresh cash designed to shore up the government finances. But it won’t do more than plug the hole created by the recent unrest and will not be enough to allow the government to meet the $3bn of debt obligations that come due in the rest of this year. Belarus has little choice other than to turn to Russia again later this year for more money, as it has been de facto cut off from the international capital markets, making Russia its lender of last resort. Half of Belarus’ outstanding $16bn debt is already owed to Russia.

The meeting was closely watched for signs of what Moscow and Minsk are proposing to do to end the crisis. Lukashenko arrived in Sochi in a considerably weakened position after his security forces attempted to stymie the now traditional Sunday protests, this week named “March of the Heroes”. But yet again the sheer number of people that came out to demonstrate swept the security forces before them; an estimated quarter of million people were on the streets, possibility making this most recent march the biggest to date.

Lukashenko has been ratcheting up the pressure and the OMON have again begun to snatch protesters from the street. Police arrested 774 people at Sunday’s demonstration according to the interior ministry, taking the total that have been incarcerated in the last month to over 10,000, although many have already been released. Another six people have been confirmed killed and some 50 remain missing, according to human rights groups. The violence has only fuelled the resentment against Lukashenko and brought ever more people onto the street.

Putin endorsed Lukashenko’s proposals to reform the constitution as “logical and timely”, but that can only happen after a referendum on the changes, which would make some modest concessions to reducing the president’s power. Lukashenko said once the constitution is changed he would be open to organising new presidential and parliamentary elections. However, Lukashenko also made it clear that the earliest this could happen was in 2022 and he has flatly refused to engage with the newly established Coordinating Council that represents the opposition and the nominal president-elect, Svetlana Tikhanovskaya.

Kremlin-pool journalists were not invited to the meeting and none of the details of the one-on-one talks between the two men were released.

But clearly there were substantial talks between the two that very likely included a discussion of implementing a proposed Union State deal that would deepen economic ties between the two countries and could create a “Rublezone”, an Eastern European version of the Eurozone. Lukashenko signed off on the framework agreement in 1999 and a lot of work on creating the legal basis of the agreement has already been done, although it has never been implemented.

The plane belonging to the head of the Federal Security Service (FSB), Alexander Bortnikov, has been in Minsk several times in the last month for short visits with Lukashenko. Then on September 3 Russian Prime Minister Mikhail Mishustin unexpectedly arrived in Minsk with a large delegation of top Russian ministers, including the finance, social, energy, culture, health and even sports ministers, in tow. Again the details of their discussion were not shared.

In addition, Lukashenko has had at least five telephone conversations with Putin in the last month and has begun to talk about the economic integration running from “Brest [in western Belarus] to Vladivostok” in an echo of Putin’s recurring call to create a single market “from Lisbon to Vladivostok”, which has been a leitmotif of his foreign policy goals.

And in the run-up to the Sochi meeting the Kremlin said that the timing of the meeting was dependent on “drawing up documents”, without giving any details.

The Sochi venue for the meeting is pregnant with symbolism, as Putin and Lukashenko were holed up in Sochi for several days at the New Year where they clashed over Russia’s plans to end its energy subsidies to Belarus worth somewhere between $40bn and $100bn, according to different estimates, over the last decade. The Russian money has subsidised Lukashenko’s neo-Soviet economic system and helped keep him in power for so long, but he left Sochi on that occasion empty-handed and in a bad mood.

It is possible that a Union State deal has been signed at this meeting, but not released to the public, as again the two men have met in Sochi to thrash out a tricky topic. The Kremlin is conscious that Lukashenko is in a weak position and could still be ousted by the street protests, which seem to still be gathering momentum. At the same time, it is clear that Putin will find it difficult to cut a Union State deal with an opposition-led government should the protesters win, despite their repeated reassurances that they want to maintain close ties with Russia. For its part, if the Kremlin has done a deal it will not want to be seen to be forcing it down Lukashenko's throat, which would alientate the already unhappy Belarusian people.

To hammer the point home, Tikhanovskaya released a statement to TUT.by saying: “I want to remind Putin, whatever you agree on in Sochi will not have any legal force. Any agreements signed with the illegitimate Lukashenko will be revisited by the new government. I regret that you have decided on dialogue with a dictator.”