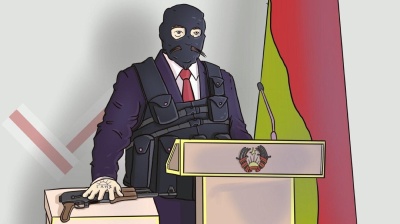 Belarusian social media was full of sarcastic comments and images suggesting Belarus' President Alexander Lukashenko is a usurper after he secretly had himself inaugurated this week.
By Ben Aris in Berlin September 25, 2020

Belarus' self-appointed President Alexander Lukashenko has isolated himself from the rest of the world with his secret inauguration on September 23. Even the former leader of the Soviet Union Mikhail Gorbachev threw his support behind the protesting Belarusian population and Lukashenko’s closest allies China and Russia have distanced themselves from the bombastic autocrat.

As bne IntelliNews reported, about a dozen countries immediately rejected the legitimacy of the inauguration after the news broke, saying the ceremony, which must be held within two months of a presidential election according to the constitution, was not valid and that Lukashenko was an illegitimate president.

But 24 hours later and it seems almost all of Europe have added their voices to the outcry. A letter from 274 parliamentarians from 29 different countries across Europe and the US was sent to Lukashenko, slamming his regime’s conduct and expressing solidarity with the people of Belarus who have been protesting against the blatant falsification of the election results that handed the president a landslide victor for more than a month.

Gorbachev added his voice to that of Europe: “Well done Belarusians. Now they already have character. It is very good. I am watching closely,” the last Soviet premier told a Russian newspaper. “However, the protesters still need to work hard. This is a matter for today's youth."

Lukashenko was sworn into office in a small ceremony attended by only 700 people, many of whom were not told where they were going, according to reports. In his acceptance speech Lukashenko went out of his way to praise the civil servants and security forces that are now the only things keeping him in power.

He later denied there were only 700 people at the ceremony, saying there were actually more than 2,000, “if you include the solders.”

Until the inauguration Lukashenko remained the legitimate president despite the disputed nature of the August 9 election, but the ceremony formally brings the old term to an end and marks the start of his new term.

Only a handful of countries have accepted the official election results, including Russia and China, but while China sent a statement saying Beijing “respected the will of the people” and congratulated Lukashenko on his inauguration, the reference to the “will of the people” was taken by analysts as China hedging its bets.

Pointedly the Kremlin said nothing after the inauguration was announced. It was reported that the ambassador was neither informed nor invited to the ceremony.

Pressed the next day and Russian presidential spokesman Dmitry Peskov confirmed that Russian President Vladimir Putin had not sent a message of congratulations nor had commented in any way on the news of the inauguration, adding that “the practice of international communication does not require this.”

“No, there is no such thing ... Actually, there has already been congratulation,” he told reporters, referring to Putin’s terse congratulation issued after the official results of the August 9 election were announced. Peskov said Putin had congratulated Lukashenko again during the two president’s meeting in Sochi on September 14.

The Kremlin’s silence adds to the speculation that it is not happy backing Lukashenko, whom they see as a liability, but at the same time the only person with whom it has any chance of securing the Union Deal Putin has been pushing for that would the deepen economic integration of the two countries.

During the Sochi meeting Putin offered Lukashenko a $1.5bn loan, but it later transpired that this was simply an offer to refinance Belarus sovereign debt to Russian state-owned entities VEB and Gazprom. As all that happens is that these debts will be moved from the two corporation’s balance sheets to the sovereign balance sheet, no actually money will change hands.

It was the very minimum Putin could do and doesn't help Lukashenko, who is getting increasingly desperate for money, but does avoid an embarrassing default on debts to Russia. There are already an increasing number of reports coming out Minsk that some state enterprises have failed to pay wages.

The only world leader that did call Lukashenko to offer his congratulations was Turkmen President Gurbanguly Berdimukhamedov.

A world united against Lukashenko

The upshot of the secret inauguration has been to unite almost all politicians in Europe and the US against Lukashenko, although the EU is still struggling to find any unanimity when going beyond strong statements of condemnation and actually taking action, such as imposing targeted sanctions.

The letter from the 274 parliamentarians said they were “strongly committed to preserving and strengthening liberty, democracy and human rights in Europe,” and were writing “with deep concern regarding the Lukashenko regime’s unjust detention of opposition leader [Marina Kolesnikova, one of the three women that ran an election campaign opposing Lukashenko] and her colleagues.”

“We demand that all charges against her be dropped, and that she be immediately released along with fellow Coordination Council members Maksim Znak, Illya Saley, and all other political prisoners. Additionally, we call for the immediate release of Vitali Shkliarov, who has unjustly languished in custody for two months,” the parliamentarians said in their letter, name several of the top opposition leaders who have been arrested by the regime.

In a warning shot to the senior members of Lukashenko’s regime that more personal sanctions were in the works, the letter went out of its way to specifically name other top aides to Lukashenko.

“Reacting to the disputed results, the Belarusian people took to the streets demanding dignity, liberty and a new election that reflects the will of the people. Sadly, Alexander Lukashenko and other regime members such as Yury Karayev, Andrey Shved and Ivan Noskevich have violently cracked down on these peaceful protests with arbitrary arrests, information lockdowns, persecution of civil society, as well as widespread torture and ill-treatment of the Belarusian people,” the letter says.

The letter mentioned the newly established Coordinating Council several times that is the representative body of the opposition and was set up at the instigation of former English teacher and nominal victor in Belarus’ presidential election Svetlana Tikhanovskaya. The Council is supposed to negotiate with Lukashenko on a transition government and to organise fresh and free elections once all the political prisoners, including Tikhanovskaya’s husband Sergei, are released.

Lukashenko has refused point blank to acknowledge the legitimacy of the Coordinating Council and the state has opened some 50 criminal cases against the body, which it accuses of trying to organise a coup d'état. In the last two week almost all the senior members of the Coordinating Council and their aides have been arrested, including Kolesnikova, whom the authorities tried forcibly to deport to Ukraine until she ripped up her passport, making deportation impossible. Most recently, Kolesnikova’s lawyer, who was supposed to appear in court today to defend her client, was arrested yesterday.

The parliamentarians repeated reference was to underscore the legitimacy of the Coordinating Council in their eyes as the body to which Lukashenko should be talking to resolve the current political crisis.

Tikhanovskaya was in Brussels earlier this week to meet with top officials and call for Europe’s support. Amongst the statements she made afterwards, she said Europe had offered “a serious economic aid package” should the protests succeed in ousting Lukashenko, without giving any details. Earlier this week a Polish official suggested giving Belarus €1bn of aid, but in a comment for bne IntelliNews Gunter Deuber, head of research at Raiffeisen Bank (RZB), says the minimum the country needs to stabilise its economy is €5bn and something north of €20bn if it is to develop.

“In conclusion, we stand in strong support of the vision of Europe free and at peace that has brought unprecedented stability and prosperity to the European Continent, where citizens choose their own future. Surely the people of Belarus deserve the same,” the parliamentarian’s letter concluded.

However, critics have pointed out that Europe has failed to agree on any concrete actions and an attempt to imposed personal sanctions on Lukashenko and his top personal was vetoed by Cyprus during a vote on September 21.

The EU has been so slow to act that the UK, Canada and the US have taken matters into their own hands and are going ahead with sanctions on their own, Reuters reported, citing sources familiar with the discussion.

The sources said the sanctions aimed to show there would be consequences for the disputed election and Lukashenko’s brutal treatment of protesters.