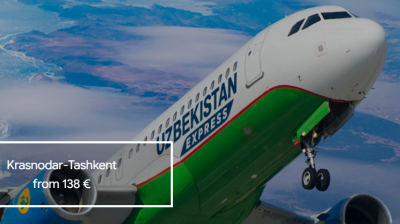 Low-cost airline Uzbekistan Express has carried out its first flight.

An Airbus A320ceo flown from Tashkent touched down at Moscow Domodedovo Airport on August 30 as Uzbekistan Airways’ advanced its plan to transition into a “hybrid model” carrier by offering budget flights laid on by Uzbekistan Express.

Uzbekistan Express will particularly focus on domestic routes, but will also operate a number of routes to Russia and Kazakhstan (Aktau and Aktobe).

“All flights are part of Uzbekistan Airways’ existing route network but will be offered at 20% discount compared to the parent airline’s standard rates. The reduction is possible due to increased aircraft capacity,” Uzbekistan Airways said.

Uzbekistan Express will face competition not only from foreign operators but from the recently launched private Uzbek carrier Qanot Sharq. It also operates two А320ceos.

Simpleflying.com posed some questions, asking:  "Will it [Uzbekistan Express] be willing or given the freedom to have meaningfully lower labor costs and higher labor productivity? Much greater aircraft productivity? Much lower ticket distribution costs? A real focus on unbundling? And many more things. This remains unclear."

In the non-coronavirus-hit year of 2019, over 1.3mn passengers flew between Uzbekistan and Russia, booking data shows.

Kyrgyzstan, Uzbekistan warn citizens not to sign up to fight for Russia in Ukraine
PANNIER: Putin arrived with little to offer an SCO summit that showed no real clout
EU extends oligarch sanctions list, but drops Zhirinovsky and Usmanov’s sister names