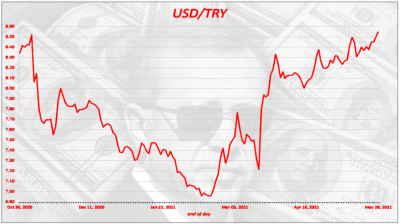 The Turkish lira hit a fresh all-time low on May 28, dropping to 8.62 versus the dollar as the economic and political upheaval facing the Erdogan administration mounted.

Two factors weighing on the embattled currency were President Recep Tayyip Erdogan’s decision this week to replace another deputy governor at the central bank with a former adviser, which threatens to further undermine the regulator’s battered credibility, and heightened political uncertainty, with the news in Turkey dominated by allegations from Sedat Peker, a criminal gang leader, on links between ruling politicians and organised crime. All of this has come against the backdrop of opinion polls showing that support for the president and his Justice and Development Party (AKP) is flagging. Opposition parties have been stepping up their calls for early elections.

Jason Tuvey at Capital Economics said: “It’s difficult to know how all of this will play out. Splits within the AK Party seem to be growing, with some members siding with the opposition in calls for a thorough investigation into Mr. Peker’s claims.

“Reports suggest that many AK Party members are also pressuring Mr. Erdogan to withdraw from the coalition with the nationalist MHP whose leader is reported to have close ties with organised crime.

“On the one hand, the change at the central bank, waning support for the AK Party and the economic damage caused by the recent lockdown may prompt President Erdogan to ramp up the pressure on the CBRT [central bank] for interest rate cuts. But on the other hand, the latest falls in the lira coming alongside high inflation have increased the risk that the easing cycle that we currently expect to begin in June is pushed back.”

The Turkish lira (TRY) dropped by 2.3% from the end of May 21 to the end of trading on May 28. It is now down by around 13.5% since the start of this year, making it the worst performing currency in emerging markets. Its previous historic low came last November when it touched 8.58. Turkey’s benchmark rate stands at 19%, while official annual inflation is at 17.1%.

With the world emerging from the coronavirus pandemic, global inflation is on the rise, lifting yields and raising the prospect of policy tightening by the US Federal Reserve. That is pulling funds from more vulnerable markets such as Turkey, hitting the lira and putting more upward pressure on domestic prices due to the country’s heavy imports.

"Earlier than expected [monetary] tightening in advanced economies is the most serious risk for Turkey because the inflationary pressures are mounting across the globe," Hakan Kara, former chief economist at the Turkish central bank who is now at Ankara’s Bilkent University, was cited as saying by Reuters during an appearance on a World Bank panel on May 27.

"If there was an early tapering [of Fed asset purchases] that would not be good news for emerging economies, especially those facing external fragilities," he added.

On the same panel, David Knight, a senior economist at the World Bank, said a strong Turkish economic rebound this year would hinge on "robust" monetary policy given high inflation and the potential for external shocks should the Fed cut its stimulus. "The outlook this year is very uncertain and hinges on the course of policy ... especially monetary policy and the effectiveness of COVID control measures," Knight added.

Saakashvili’s return: more shrewd than it seemed?
20 minutes ago
Czech PM to allow opposition coalitions to form new government
8 hours ago
Hungarian opposition voters pick Marki-Zay to challenge Orban in 2022 elections
8 hours ago
Efforts to deploy US counterterrorism forces in Uzbekistan may not be over
2 days ago
Turkmen petrochemical plants ‘channelling exports via obscure UK firms tied to president’s nephews’
3 days ago