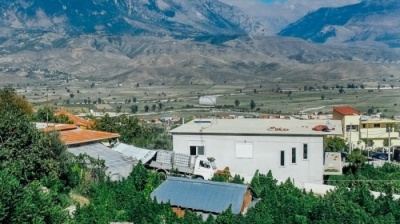 The Albanian village of Lazarat, notorious as Europe's "marijuana mountain" until a military-style crackdown in 2014.
By bne IntelliNews January 28, 2020

The cultivation of cannabis in Albania jumped by 1,200% during 2019, Italian media reported on January 27, citing a police report.

Albania was previously known as a major producer of marijuana, until the launch of a government crackdown in 2014, which significantly reduced the number cannabis plantations. At its peak, the cultivation of cannabis accounted for about half of Albania’s GDP.

Three years later, Prime Minister Edi Rama pledged to wipe out large-scale cannabis plantations by the end of 2017, with the prime minister saying later in the year that the industry was dying out. The government hoped to encourage legal businesses in Lazarat by including the settlement among 100 villages in the country selected to have their infrastructure upgraded.

But if the new report is correct, there has been backsliding since then. Italian public broadcaster RAI3 reported that according to an unpublished report by the Italian police around 100,000 cannabis plants are growing in Albania now.

Italian prosecutor Giacomo Cataldi was cited by RAI3 as saying that Albania has become one of the main cannabis producers. As a result, the Albanian mafia has accumulated large amounts of money, which have enabled them to take a leading role in drug trafficking and other criminal activities in Europe.

The fight against drug trafficking is one of the key requirements of the EU, along with the wider fight against crime and corruption and justice reforms, for the country to obtain a date to start accession talks later this year.

Parliament passes tenth amendment to the constitution, giving the radical rightwing government the power to declare a state of emergency in the case of an armed conflict in a neighbouring country.