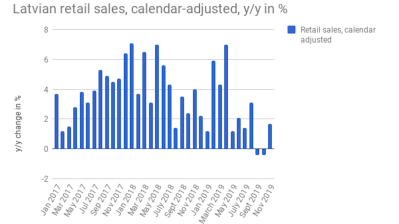 Latvian retail sales expanded a calendar-adjusted 1.7% y/y in November, returning to expansion after a decline recorded the preceding month, data from the Central Statistical Bureau (CSB) showed on December 30.

The November gain ends a short two-month streak during which retail turnover fell in Latvia after 45 months of uninterrupted growth. The weaker performance is in line with forecasts of a slowdown in economic growth in 2019.

Latvian GDP growth, meanwhile, picked up to 2.9% y/y in the third quarter, unadjusted data showed in early December. That is a gain of 1.1pp versus unadjusted y/y growth in the second quarter.

The CSB did not publish seasonally adjusted data for annual growth in the third quarter although Swedbank estimates it at 1.9%. That would be a slowdown versus an estimate of 2.5% y/y in the second quarter.

Incomes are poised to keep rising in Latvia, driving consumption. The country’s labour market continues to tighten. Gross monthly wages in Latvia grew 8.4% in 2018 - compared with an expansion of 8.6% in 2017 - and 8.3% y/y in the third quarter.

Broken down by category and in calendar-adjusted terms, sales of non-food products expanded 2.9% y/y in November, compared with an expansion of 0.3% y/y in October.

Food sales grew 1.1% y/y in November against no change the preceding month.

In the non-food sector, nine out of ten segments recorded y/y growth in November. Sales of hardware, instruments, construction materials and sanitary goods were the only segment to see turnover decline, at 9.6% y/y.

In monthly terms, sales gained a seasonally adjusted 2.6% in November, compared to a fall of 0.2% m/m in October.