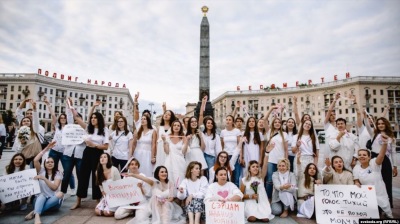 Thousands of women started the demonstrations off in the evening of August 12, many of them wearing white, the colour of the oppostion
By Ben Aris in Berlin August 13, 2020

It was Ladies' Night during the protests in Minsk on August 12. The evening demonstrations got underway with thousands of women marching through the centre of Minsk to meet at the obelisk on the Minsk Hero City square in the centre of town. With mostly men taking the brunt of the police attacks in the preceding nights, the women were out in force presenting the brutal riot police with a problem, as the optics of beating women are bad, even in Belarus.

The women carried flowers and many of them were wearing white, which has become another symbol of the protests against Belarus President Alexander Lukashenko, who falisifed the presidential election results and is attempting to stay in power by the use of brute force. They said they were marching in solidarity with the other protests that have held the front line against the riot police in the street fighting of the last few days.

The opposition to President Lukashenko already has a very female flair, as it was led by the three women, Svetlana Tikhanovskaya, Veronika Tsepkalo and Maria Kolesnikova, the first two of which are now in exile in Vilnius and Moscow respectively.

Medical workers also came out for the protestors, demonstrating outside the biggest hospital in Minsk until police officers were quickly dispatched to break up the demonstration.

There were also more soldiers on social media filming themselves throwing their uniforms into the rubbish, including members of the elite speznaz units. Clearly Lukashenko doesn't command the loyalty of all the armed and civilian forces, but it is impossible to judge how widespread these sentiments are.

“The most important takeaway from today's solidarity actions in Belarus is that Lukashenko's attempt to terrorize the people has failed. Even more people took to the streets today than last night – men, women, workers, medics, TV anchors – we are witnessing the birth of the nation,” Tadeusz Giczan tweeted, a Belarusian PhD candidate at University College London School of Slavonic & East European Studies and bne IntelliNews contributor.

“Police are still horrendously brutal but they can't arrest more people because the detention facilities are full. With the internet back, people realised they are in absolute majority, so they don't need to respond to violence with violence,” Giczan added. “The nation isn't split like in Venezuela, where Maduro still has a significant support. The only support Lukashenko has is his goons and a handful of corrupt officials who won't have future in a new Belarus. But I think even they are [beginning] to understand that the end is near.”

Lukashenko remains in denial and went on TV to blame criminals and the unemployed for causing the fracas. "The core of these so-called demonstrators are people with criminal pasts and unemployed peasants. No work means 'go and play on the streets'. So I'll try and be nice and ask and warn everyone: find a job," the president told a national TV audience. But his system is getting overloaded as pictures appeared online of detainees being held in the gyms of schools, as there was no more room in the jails.

The opposition goal on August 12 was to close down the roads in Minsk by jamming them full of cars. Riot police took to walking down the queues of car randomly smashing windows and breaking off wing mirrors. Other drivers were dragged out of their vehicles and severely beaten with truncheons in what is best described as a campaign of arbitrary terror.

The focus on drivers began the night before as police began to stop them as they drove by honking support for the protestors, and beat them. In other incidents the police fired rubber bullets at car windows at point blank range.

One taxi driver shared pictures of bruises he received after a beating, after he had been stopped with two customers in his back seat. “No one has stopped the loan repayments on the car,” he told Nexta ruefully. 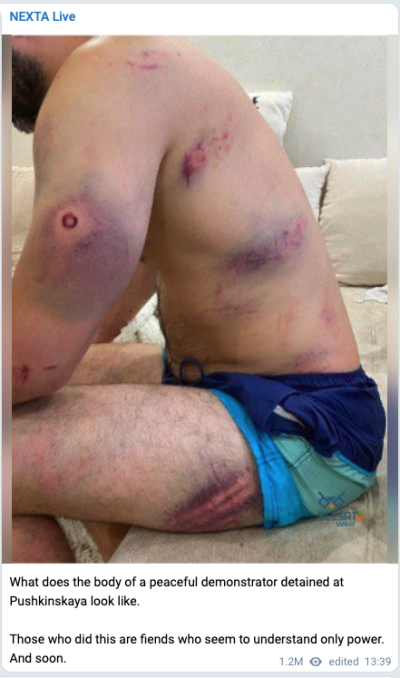 But in the most shocking incident a 5-year-old girl was badly injured when a police vehicle rammed her parents' car in Grodno. The family were driving through the city when they found themselves stuck in traffic and surrounded by honking cars. They were trying to escape when the car was attacked by OMON officers. The girl was taken to hospital for treatment. Her picture already started to appear amongst demonstrations the same evening. 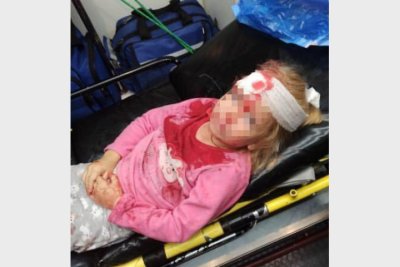 A second confirmed death was reported on August 12. Aliaksandr Vichor, a 25-year old man in Homiel, was on the way to meet his girlfriend but got caught up in a demonstration. He was taken away in a paddy wagon and beaten. He later died in hospital. No other details were released by the police. The death follows a man that was run over by a police truck and died from head injuries during the clashes with police on August 10.

The Belarusian Interior Ministry confirmed that police had opened fire with live ammunition at the protesters during the protests in the evening of August 11, who they claim were armed. One person was injured but no one was killed.

As bne IntelliNews reported, Lukashenko upped the ante by deploying elite troops carrying rifles as countrywide clashes escalated. But the protests on August 12 took on some new characteristics as protesters settled into their role.

More details have emerged on the targeting of journalists by the police. The independent Belarus Association of Journalist union reports 55 arrests, 17 cases of violent assault, 3 cases of journalists injured in police actions, at least 10 cases of damage to cameras and removal of memory cards and a total of 25 journalists now in custody awaiting trial.

Crowds have been gathering outside prisons looking for detained relatives and the cries of those being tortured inside are clearly audible outside their walls. Many examples were shared online. In one post cries were heard from behind a wall topped with barbed wire:  "Don't! Stop, please! I can’t see anything!"

One particularly harrowing clip that was aired on national TV showed a line-up of young people who had clearly been beaten promising not to return to the protests. The voice of the officer questioning them had been distorted, giving the video a particularly Orwellian darkness.

Strangely, Belarusian Eurobonds were trading higher on August 12 despite the escalating political crisis in Minsk.

The Lukashenko regime is under extraordinary pressure and there are signs that his authority is cracking as soldiers have gone online and filmed themselves throwing their uniforms in the rubbish.

In another video the police chief for a district in Minsk was filmed telling protestors that his men won’t touch the demonstrators. However, it remains impossible to say how widely these sentiments are held by the rank and file, but it does suggest there could be a very sudden end to Lukashenko’s support if these sentiments reach critical mass.

And the regime is running out of firepower. The internet was restored on August 12, so the people updated themselves as to what has been going on. Ironically Western observers have been better informed about events in Belarus than the locals, who have had only spotty connections to the internet over the last four days.

In one of the most uplifting videos showing an open act of defiance by the ordinary people that went viral on August 12, at a meeting in one of Minsk’s factories where the factor director was extolling Lukashenko’s victory in the election, someone at the back shouts: "Stand up if you voted for Tikhanovskaya!" Everyone immediate stood up and shouted the director down.

New US ambassador may not go to Minsk

The US should not send its newly appointed US ambassador to Belarus Senator Chris Murphy, a member of the Senate Foreign Relations Committee, said and called on the White House to withdraw its appointment.

The US has not had an ambassador in Belarus for more than a decade, but as relations warmed recently Murphy was appointed in April and was due to take up his role around now. The violence that followed the elections has changed everything.

Murphy said Lukashenko was trying to “steal” the election and had threatened opposition candidate Svetlana Tikhanovskaya into making a “hostage video accepting his victory in the elections.”

“These tactics are unacceptable and signal the weakness of a leader who must resort to force in order to stay in power,” Murphy said in a statement cited by The Hill. “While I support greater ties between the United States and the Belarusian people, now is not the time to be elevating the diplomatic relationship with Lukashenko’s government.”

“Sending an Ambassador to Minsk now, for the first time in over a decade, would signal that the United States condones these actions, and I am prepared to oppose the nomination in the Foreign Relations Committee unless it is withdrawn by the President.”