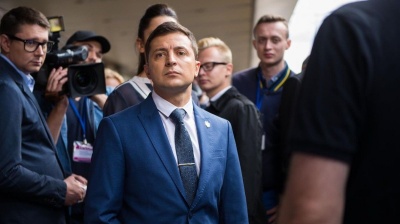 Last week Ukrainian President Volodymyr Zelenskiy gave a very tough speech, covering anti-corruption, particularly with respects to oligarchs, relations with Russia, including the status of Crimea, and references to two of his predecessors as president. He entitled his speech “Ukraine Fights Back.”

The came on the heels of the decision by Ukraine’s National Security & Defence Council, taken on February 2, to shut down 3 TV stations allegedly owned by Viktor Medvedchuk, the leader of the largest opposition party in the Parliament and someone who is very close to Putin. On February 19 financial sanctions were imposed on Medvedchuk, his wife, and several others for, allegedly, "financing terrorism,” and an oil product pipeline controlled by Medvedchuk was nationalised.

In part, the speech seems to be designed to serve as a kind of continuum, between the shutting down of Medvedchuk’s TV stations and today. The obvious questions are what will come out of the speech, in terms of anti-corruption successes, de-oligarchisation, relations with Russia and relations with the West, especially the United States.

Here is what struck me from the speech:

Zelinskiy looked more “Presidential” than he has in the past – During the recent interview with Axios Zelinskiy didn’t look presidential. He was sitting, sometimes cross-legged, in a room that filled with somewhat garish furniture. For this speech he was standing, looking into the camera, with the symbols of Ukraine behind him.

In his speech, President Zelinskiy specifically mentioned Kolomoisky in the following passage, ”Medvedchuk, Kolomoisky, Poroshenko, Akhmetov, Pinchuk, Firtash or anyone else. One thing is important – are you ready to work legally and transparently or do you want to continue to create monopolies, control the media, influence deputies and other civil servants? The first is welcome. The second ends.”

Kolomoisky was Zelinskiy’s long-time business partner; his show “Servant of the People” appeared on Kolomoisky’s television station. The fact that Kolomoisky is specifically mentioned alongside Medvedchuk in a passage directed against oligarchs is extremely significant. Poroshenko likely appeared primarily because he is a potential rival of Zelinskiy in the next Presidential election, scheduled for 2024.

In his discussion of PrivatBank, Zelinskiy indirectly mentioned Kolomoisky, when he said: "Regarding the sanctions of the United States of America against the former owners of PrivatBank (including Kolomoisky), we support this decision and we are working to return the money to Ukraine.” Zelinskiy may be referring to the fact that the United States has placed financial sanctions on Kolomoisky, his wife, and two children, in addition to initiating two civil forfeiture complaints against properties partly owned by Kolomoisky. It is quite possible that US criminal indictments will be forthcoming.

“The state strategy of de-occupation and reintegration of Crimea and Sevastopol has been approved. To those who counted on something, I can say: forget that Ukraine will forget about Crimea. At the same time, when we talk about de-occupation, it is logical to understand who created conditions for occupation and how? And we are talking not only about 2014, but also about the adoption of the so-called Kharkiv Agreements.”

The “Kharkiv Agreements” refer to an agreement giving Russia a 25-year extension on the lease that gave the Russian Black Sea Fleet the right to use the Port of Sevastopol, prior to Russia’s invasion and occupation of Crimea. Zelinskiy wants to hold criminally responsible all of the former Members of Parliament who voted to ratify the Kharkiv Agreements.

“I emphasise – taken by our state, at our discretion, in accordance with our duty, and not because someone called us.” “Someone” almost certainly refers to the Biden Administration.

Why did Zelenskiy give this speech now?

It should be remembered that Zelenskiy, after professing his support for addressing pervasive corruption after his election, and after July 2019, when his Party won an absolute Parliamentary majority, on March 1 of last year fired almost all of his entire government, including several prominent figures known for anti-corruption.

In giving the speech, and after the actions against Medvedchuk, has he now changed his mind, once again, about attacking corruption? In his speech, Zelinskiy said:” While you and I believed that justice existed, and tried unsuccessfully to find it, some appropriated state resources, subsoil, strategic enterprises, pipelines and even, as it turned out, the Constitutional Court of Ukraine. In a word – everything in sight.”

Another reason might be that Zelinskiy wants to deflect the public’s attention from Ukraine’s failures in fighting coronavirus (COVID-19). If so, to some extent he is using a tactic from Putin’s playbook – when your poll numbers are falling, attack someone. This is exactly what Putin did in Ukraine in 2014.