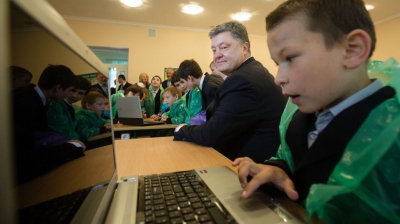 Big brother? President Petro Poroshenko’s move is seen as connected to the fact that the presidential election is approaching. / Photo: Ukraine government office
By Nick Allen in Warsaw May 21, 2017

Tit-for tat restrictive measures imposed by Kyiv and Moscow since 2014 have hit many expected areas, from energy to food imports to transport. But Ukrainian President Petro Poroshenko’s latest strike at all things Russian looks set to backfire: a decree published on May 16 that prohibits Russian social media and other internet sites used by millions of Ukrainians has drawn sharp criticism.

Targets of the ban, drafted by Ukraine’s National Security Council, include the Yandex search engine, anti-virus companies Kaspersky Lab and Dr.Web, and the 1C accounting software that is used by thousands of Ukrainian companies.

“It’s time we acted with more determination,” the president wrote on May 16 on his pages on Russia’s biggest – and as of June 1, banned – social networks Vkontakte and Odnoklassniki, both controlled by Mail.ru, which boasts 25mn users in Ukraine. “Hybrid warfare demands adequate responses to challenges.” (Interestingly, Poroshenko’s own website came under cyber attack the same day, prompting the Kremlin to deny claims that it was responsible.)

Speaking to journalists in Strasbourg, Poroshenko said the ban of Russian social media could be reviewed “immediately after Russia ceases aggression against Ukraine, immediately when the last Russian soldier leaves the sovereign and independent territory of Ukraine”.

The ban has immediately come in for strong criticism from international human rights organisations. “Blocking of social networks, search engines, mail services and news websites goes against our common understanding of freedom of expression and freedom of the media. Moreover, such blanket bans are out of line with the principle of proportionality,” Council of Europe Secretary-General Thorbjorn Jagland said in a statement.

Ukraine is a party to the European Convention on Human Rights and the International Covenant on Civil and Political Rights, which both guarantee freedom of expression, including access to information.

Human Rights Watch also joined the fray, branding the ban a “cynical, politically expedient attack on the right to information affecting millions of Ukrainians”, and calling upon Poroshenko to immediately rescind the measures. “In a single move Poroshenko dealt a terrible blow to freedom of expression in Ukraine,” said Tanya Cooper, a Ukraine researcher for the organisation. “It’s an inexcusable violation of Ukrainians’ right to information of their choice, and the European Union and Ukraine’s other international partners should immediately call on Ukraine to reverse it.”

The Kremlin – no stranger itself to restricting social media and other websites – was not slow in seizing the moral high ground over Kyiv’s move, which also affects Russian television companies TV Centre, RBC, NTV Plus, Zvezda, TNT, Moscow Media, Rossiya Segodnya and REN TV.

“It [the anti-Russian sanctions expansion] is yet another step in a chain of many others that violate Ukrainian people’s right to receive information they want to know,” President Vladimir Putin’s spokesman Dmitry Peskov told journalists.

Oksana Romanyuk, executive director of Kyiv-based Institute of Mass Information, told Human Rights Watch that the government had not provided a valid justification for why such a broad ban on online companies was necessary. She also insisted that the decree would be hard to enforce without changing the law. Currently, only a court can order internet service providers to take action against a website.

The head of Ukraine’s internet association, Oleksandr Fedienko, said in a media interview that Ukrainian internet service providers do not have the technical ability to block Russian social media and news websites. He also expects the ban to be ineffective due to a variety of ways to circumvent online censorship. Additionally, such a blockage would cost around $1bn to implement, Fedienko told the 112 Ukraina TV station.

Poroshenko’s decree expands the list of those under sanction in Ukraine to 1,228 individuals and 468 legal entities in Russia, Russia-occupied Crimea, areas in eastern Ukraine’s Donetsk and Luhansk regions controlled by pro-Moscow separatists, and other countries. The duration of sanctions varies from one to three years.

Other critics cited further reasons that the internet ban is likely to backfire. “Ukrainian intelligence services are (necessarily) active on VK, wrote an Odesa-based commentator blogging as Nikolai Holmov. “How will the move affect their operational intelligence gathering?  Social media and unencrypted end-to-end telephone calls/texts are low hanging fruit for all security services after all.”

After the ban takes effect there will also be a massive surge in the use of VPNs masking IP addresses to allow entry, and also hiding page visits from ISP providers, Holmov predicted, also noting that there does not appear to be any current Ukrainian legislation that places a legal penalty upon any ISP provider that does not comply. And generally, “There will also be a lot of Ukrainians … who will feel they do not need governmental parenting when it comes to Russian disinformation and infiltration”.

However, the ban does have its domestic supporters. It isn’t censorship, insists Ukrainian political analyst Taras Berezovets. “It is not a secret that Odnoklassniki, Vkontakte and Mail.ru are being actively used for propaganda and counter-propaganda in the interest of Russia’s law enforcement,” Berezovets wrote on Facebook. “The Security Council’s decision to ban — let’s call them what they are — Russia’s diversionary resources is not just right, but vital.”

Serhiy Leshchenko, a critical lawmaker with the Petro Poroshenko Bloc parliamentary faction, believes Poroshenko’s move to impose sanctions against social media was connected to the fact that the presidential election is approaching, “rather than the fight against Russian propaganda”.

According to the MP, Poroshenko intends to shift the agenda of public discussions to the president’s “pseudo-patriotism” instead of the fight against endemic high-level corruption in the country. “Aiming to have everything done by [presidential elections in] 2019, he [Poroshenko] has to start right now,” Leshchenko wrote on his Facebook page.

KYIV BLOG: Zelenskiy goes to Washington but comes back with little of what he wanted

KYIV BLOG: Ukraine in May

KYIV BLOG: Don't believe the hype
KYIV BLOG: Zelenskiy goes to Washington but comes back with little of what he wanted
KYIV BLOG: Ukraine in May