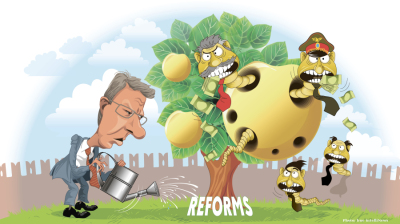 Former Finance Minister and Audit Chamber head Alexei Kudrin says the government is being too optimistic about its growth assumptions and that the 3% target is not realistic,
By Ben Aris in Berlin October 18, 2021

Russia’s economy has been bouncing back from the coronacrisis nicely with growth in the second quarter soaring by 10.7% year on year – a new record. But most of that gain is due to the low base effect as the economy ground to halt in the second quarter of last year as the country was put on lockdown.

Those low base effects are already wearing off and growth slowed to 3.7% in July and will continue to slow as the last of the low base effects wear off when compared to last autumn, when Russia’s economy more or less returned to normal.

Similar results are already visible in the monthly IHS Markit Russia Manufacturing Purchasing Index (PMI) index, which polls business owners each month to get a feel for how their businesses are doing.

Russia’s seasonally adjusted Services Business Activity PMI recovered in September 2021, rising above the 50 no-change mark to 50.5, after taking a dive to 49.3 in August, but the Manufacturing PMI is still under water at 49.8 in September, still up from 46.5 in August.

“The estimate for Russia’s 2021 GDP growth is 3.8% against 2.9% [previously]. The reason for the increase of the GDP forecast for 2021 is better dynamics of consumer and investment demand,” a spokesperson for the ministry told reporters.

The International Monetary Fund (IMF) also increased its Russia forecast for this year in its latest global review. Russia’s GDP will grow by 4.4% this year and 3.1% next year, compared with the 3.8% growth rate projected in April for both 2021 and 2022, according to the IMF’s latest world economic outlook.

Even the improved growth rates remain a problem for Russia, as the IMF sees the global economy expanding by 6.0% in 2021 and 4.9% in 2022, no change from its previous estimates.

One of the tasks Russian President Vladimir Putin set for the 2021-2023 strategy was for Russia’s economy growth to exceed the rate of global growth, otherwise Russia’s economy will slowly fall further behind that of the rest of the world.

Kudrin not only rejects the optimism of both the Economics Ministry and the IMF, but says Russia’s growth won’t even reach 3%, saying many of the assumptions in the budget are unrealistic.

One of the most important factors is the persistent underinvestment by company owners and government. Fixed investment in the first half of this year has been surprisingly strong, but much of that is due to stimulus money that is not expected to be continued in the new budget.

In addition, the government does not say anything about the mechanisms for attracting domestic investment resources and foreign investment. There is no information in the document about how it is planned to invest funds from the NWF in excess of 7% of GDP in 2022 and indeed, the amount of money available for investment from the NWF has just been decreased as the new budget raises the cap on when this fund can be tapped from 7% to 10% in anticipation of falling oil revenues in the coming decades. By 2024, the National Welfare Fund is forecast to hold assets worth more than 15% of GDP during what would be strong growth conditions for Russia compared to the last decade: 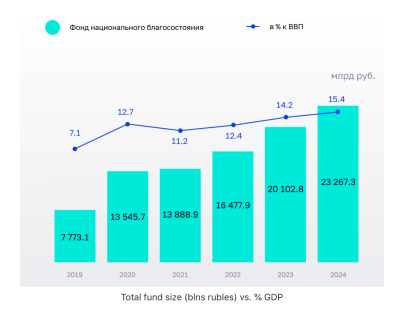 As bne IntelliNews has speculated, the reluctance of business to invest is linked to political instability and the lack of strong property rights. For most businesses, once they have built their companies up into profitable ventures that have made them rich men they are deterred from continuing to grow and prefer to take their profits as dividends instead. The upshot is Russian companies are currently paying the highest dividends in the world and twice that of the benchmark MSCI EM average.

"The dynamics of investments in fixed assets, indicators of growth in industrial production and investment imports are inconsistent," notes the Audit Chamber, as cited by The Bell.

Consumer demand is another one of the main economic drivers and that has also performed well in the first half of this year as demand bounced back following last year’s lockdown. But consumption will not provide the forecasted GDP growth either, says Kudrin.

The government assumes that household incomes will recover faster in those items, where they fell more strongly in 2020 – these are incomes from property and business. But there will not be structurally gains, the state auditors point out.

In effect, Kudrin argues, the government is counting on accelerating the economy through consumer lending with the growth of real disposable income of the population in 2022-2024 below the growth in retail trade turnover (2.4-2.5% versus 2.8-2.9%). Growth due to the rapid decline in the propensity of the population to save is unlikely based on the experience of the 2015 crisis, the auditors write.

However, it appears that the recent mini-consumer boom, fuelled by subsidies, is already running out of steam.

“Mortgage demand plummeted 41.4% in September alone. Despite having prolonged the de facto mortgage subsidy programmes through next year, households are exhausting their available savings to hop on the property ladder as inflation and home prices keep rising. Yet the demand for mortgages worth more than RUB12mn has almost tripled y/y through 3Q 2021. This is about inequality in the end and the fact that economic policy is avoiding running the economy hot in the right way so the gains stick for lower-wage workers and inflation is beaten by easing bottlenecks,” said Nicholas Birman Trickett, a Russian analyst in his OGs and OFZs newsletter.

And the bet that the population will borrow more to fuel consumption also looks misguided. The population has already been borrowing heavily to the point where the Central Bank of Russia (CBR) has started to get worried that a consumer credit bubble is beginning to form.

“Household borrowing has risen over 80% since January 1, 2018 and risen over 40% faster than borrowing in the rest of the non-financial sector,” says Birman Trickett. “That's what's been holding growth up for manufacturing and housing investment as well as demand.”

But as inflation soars the CBR has been hiking rates and is expected to hike again at the October meeting that is making the cost of borrowing higher. That is one factor that has popped the mortgage bubble: the rule of thumb that each one per cent rate cut makes a mortgage affordable to millions more Russians means the string of rate hikes this year – March (25bp), April (50bp), June (50bp), July (100bp), September (25bp) – is making mortgages less and less affordable, despite the subsidy programme.

The Audit Chamber notes that 3% of GDP growth in the Ministry of Economic Development forecast is actually a target and not a forecast. Moreover, Kudrin worries that the crisis scenarios underestimate the impact of a shock, as the ministry is overly confident the extra resources being built up in the current good times are sufficient to cushion any blow.

The forecast also assumes that all the 12 national projects and all the other state modernisation programmes are going to be implemented in full, which almost never happens, says the Audit Chamber.

In the words of the late Prime Minister Viktor Chernomyrdin: “We hope for the best, but things turn out like they always are.”