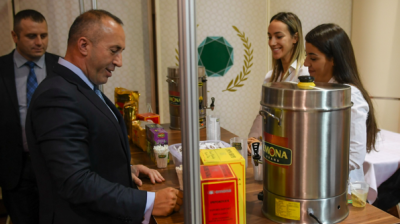 Kosovan Prime Minister Ramush Haradinaj said on December 3 that 100% customs tariffs imposed on products imported from Serbia will be removed if Belgrade recognises Kosovo as an independent state.

Kosovo introduced the measure, which is also applied to Bosnia & Herzegovina, on November 21, one day after Kosovo’s bid to join Interpol failed due to the increased Serbian pressure on member countries to vote against Kosovo's membership.

Kosovo unilaterally declared independence from Serbia in 2008, but it is still not recognised as a separate country.

At the news conference after he met EU Enlargement Commissioner Johannes Hahn in Pristina, Haradinaj explained that Kosovo imposed the taxes following continuing obstacles from Serbia, preventing Kosovo from becoming a member of international organisations.

However he said, according to RTK, that Pristina is ready to sign a free-trade agreement with Serbia if Belgrade recognises Kosovo.

Haradinaj also emphasised the commitment of the Kosovan government to the path of EU integration, and the priorities of the rule of law and economic development.

Hahn said previously he will urge the Kosovan authorities to remove customs tariffs imposed on goods imported from Serbia and Bosnia in order to “unblock regional cooperation.

Hahn arrived in Pristina from Belgrade where he held talks with Serbian President Aleksandar Vucic in a meeting focused on the Kosovan tariffs.

Following his visit to Belgrade Hahn said in a tweet: “Good meeting with Vucic in Belgrade where we discussed the introduction of tariffs on goods from Serbia and Bosnia by Kosovo which obstructs CEFTA agreement and regional cooperation. We agreed on the urgent need for de-escalation."

Vucic warned of the possible consequences of the “irresponsible move by the Kosovo authorities” to increase taxes, which, according to him, could lead to destabilisation of the region and the escalation of violence.

Meanwhile on the evening of December 2, Kosovo Serb lawmakers refused to leave the parliament building to protest against the 100% hike of customs tariffs. Ten MPs demanded to meet Hahn to discuss the issue.

Serbian Prime Minister Ana Brnabic previously urged EU partners to start solving the problem, saying the introduction of import taxes is against the CEFTA agreement and the EU’s Stabilisation and Association Agreement.

Serbia and Bosnia have decided not to take reciprocal measures against Kosovo for the time being.

Earlier on December 3, Haradinaj said that the goal of imposing the customs tariffs is to reduce imports and boost domestic production.

“The 100% tax on Serbian and Bosnian products should not be seen as a chance to benefit from rising prices but to increase production and quality,” Haradinaj said in the government statement.

He added that even at the beginning of the implementation of the measure, the tax has contributed to the increase of domestic production.