King of the castle: Friday the 13th for Russian markets in third-worst crash ever 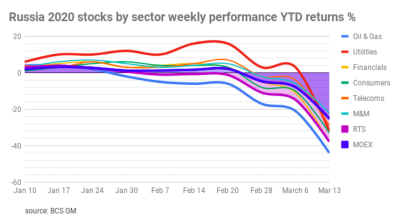 At the end of one of the most turbulent weeks on the Russian stock markets since 2014 almost the entire page of stock prices reported by Alfa Bank in its weekly wrap was red: price changes in the last day, month, 52 weeks and year to date were all down. The only stock to show green for all these periods was Acron, the Russian fertiliser company.

“Markets plunged lower [on March 12] as investors moved from uncertainty to panic: Stocks spiralled lower in a bear market Thursday as the c-virus-driven selloff accelerated,” Alfa Bank said in a note to clients. “The Russian market was heavily sold with the RTS back at the lows of November 2016 in a broad selloff with liquid names hardest hit.”

Russian equities have faced a perfect storm that has destroyed all the value gains from the strong start the year. The golden year of investing in Russia is simply to ask: “is this a crisis year”. If the answer is “no” then the market usually returns at least 20%.

Clearly the answer to that question this year is “yes”. Things get really nasty in crises. In 1998 the market fell 85% y/y, in 2008 it was down 72% and in 2014 it dropped 45%. This year’s crisis is already looking like it will be a vintage of disaster: the RTS YTD is now under the important 1,000 mark as of the close of trading on March 12 and has lost 37.9% making it Russia’s third biggest selloff since the market was established in 1996.

Digging into the sectors and the picture is even more grim. Oil and gas companies have obviously taken the brunt of the selling following the collapse of the oil prices and the sector as a whole is down 44% as of March 12, according to BCS Global Markets.

Financials and consumers are also down 38% and 33% respectively and both these classes were doing well at the start of the year on the hopes that the “helicopter” money Russian President Vladimir Putin promised to spend on the social sphere this year during his January 15 state of the nation speech would boost these sectors.

Maybe the biggest casualty has been the utilities sector which is down 32% since the start of the year. This sector has been outperforming for the last nine months and was the only sector to show any sort of resilience to the mounting nerves following the market’s peak on January 20. But all that resolve has gone now and portfolio investors have clearly decided that this crisis is a big one and fled the market to lick their wounds. Bonuses for traders are going to be thin on the ground this year.

Finally, oddly, the metal and mining sector has been the best performer “only” losing 22% YTD, but that may be because previously it was the worst performer and investors had already sold out of the section.

The ruble was also hit again, dropping below RUB75 to the dollar where it was at the start of the week, giving up the small recovery back to RUB72 it made in the next days.

The panic was stoked as countries across Europe took even more drastic action, putting their populations on lockdown. Italy ordered all its stores and public places like schools closed. The rest of Europe is maybe a week behind and similar measures are almost certain to be widely implemented across the region.

Oil prices were in also in free fall as Brent lost 7.8% on March 12 to fall to $33.00, “due to a combination of the oil price war, further demand concerns due to travels restrictions in Europe and beyond, as fallout from the virus intensifies,” Alfa Bank said.

King of the castle

Tens of billions of dollars have been wiped off the market capitalisation of Russia’s top stocks. Gazprom has been particularly hard hit with its market cap halved in value from $96.8bn at the January 20 market peak earlier this year to $52.3bn on March 12 – a loss of a whopping $44bn: Gazprom’s valuation has been falling by $6mn per minute over the last two months. 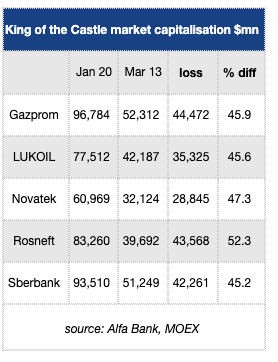 The big question is when will the market hit bottom? As the chart above shows these big selloffs are always followed by a big bounce back. But timing is everything.

As bne IntelliNews reported earlier this week, some bottom fishers appeared on the market on March 3 as Russian stocks are clearly extremely cheap again. The buying was concentrated in the utilities names, where the investment story remains attractive.

However, the market has stepped down again in the last two days. In the previous selloff in 2014 at its lowest point the RTS was trading at 667, but it quickly recovered to around 850 before slowly starting a five-year-long recovery. With the RTS closing at 966 on March 12 the market is clearly close to its bottom again, but more shocks could send it down briefly into the 600s again like last time.

Alfa bank was upbeat and said it sees some signs of relief at these levels. As bne IntelliNews reported there has been a wave of top Russian managers and owners buying stocks in their own companies in the last few days, and some companies are announcing they will launch new buyback programmes to support their share prices. Alfa Bank reports some speculators are also getting into the market again at these prices, but advised caution.

“Friday the 13th provides a fitting end to a terrible week for financial markets. In saying that, we see signs of relief this morning for Russian equities after Thursday’s collapse, with US futures pointing 1.6% higher and oil prices rebounding. The ruble has also strengthened about 2.0%,” Alfa Bank said in its morning monitor. “We caution though that volatility remains at record highs and investors are jittery because of a belief that fiscal plans and the Fed’s ramped-up funding actions wouldn’t be sufficient to offset the economic impact from the coronavirus… But the trouble with sudden economic stops being it is not easy to restart an economy. In our view the selloff is not yet over, with recession a possibility and the Covid-19 virus continuing to spread through Europe and North America causing severe economic disruptions."