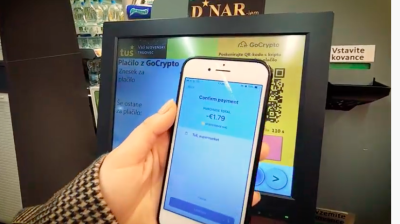 Making a contactless payment with GoCrypto at a Tus supermarket in Slovenia.
By Clare Nuttall in Ljubljana March 23, 2020

While companies around the world are closing their doors temporarily to reduce the risk of spreading the coronavirus (COVID-19), Eligma, the developer of the GoCrypto payment system that supports cryptocurrency payments at bricks and mortar retailers, is expanding.

The Slovenian company has sent many of its staff home to work, but is still going ahead with a planned expansion into Latin America, and stresses that its technology is more relevant than ever at a time when minimising human contact has become top priority.

The company’s main product is the Elly mobile app and POS solution that makes it easy to pay online or in store with several cryptocurrencies, including bitcoin and Eligma’s own GoCrypto.

As with contactless card payments, mobile crypto payments are entirely contactless, reducing the risk of infection for people buying groceries and other essentials.

“Crypto wallets like [Eligma’s own] Elly or the Bitcoin.com Wallet … enable fast, direct transactions — all truly contactless, made with your phone. All of these advantages make them not only one of the simplest, but also one of the most recommended ways of payment at this moment,” said a March 20 statement from the company.

Four days earlier, CEO Dejan Roljic announced the company was keeping its services going uninterrupted, including its expansion into new markets. “We have found ourselves in an unprecedented global situation of a scale that the world has never seen, but with our collaboration as a global community, with connected technology, we can brave it together,” Roljic wrote.

Well before the current crisis erupted, Slovenia had already become the world’s top destination for cryptocurrency payments in bricks and mortar stores and other venues, with hundreds of retailers now accepting crypto payments. The country of just over 2mn people has more retailers that accept bitcoin than the US (population 327mn), and there’s even a public monument to bitcoin in the industrial city of Kranj near the capital Ljubljana.

High levels of mobile and internet penetration, the highest incomes across the Central and Southeast Europe region, and general tech savviness all play a part, but to a large extent the integration of cryptocurrency payments into everyday life has been driven by Eligma.

The company’s mission is to bring cryptocurrencies from a niche product into everyday life. “The Eligma company is convinced that the advantages of the latest technologies including blockchain should become part of mainstream commerce, making it more efficient and user-friendly,” said Roljic back in September 2018.

In Slovenia, there was a high level of interest in crypto among the population, many of whom bought cryptocurrencies and wallets but didn’t have many opportunities to use them due to the lack of outlets accepting crypto.

“There are a lot of tech and blockchain companies here, but in our opinion, businesses do not adopt things just due to openness to new technologies. They do that because of increasing demand from the customers, and of course because of how practical and simple-to-use a solution is,” an Eligma spokesperson said in comments emailed to bne IntelliNews.

This was what Eligma hopes to achieve. According to the company: “GoCrypto enables instant crypto transactions and it easily integrates into the merchant’s existing software. The merchants do not have to know anything about crypto; they just select GoCrypto as a new payment method and receive settlement in their local currency,” the spokesperson said.

“The quick adoption of GoCrypto led to Slovenia becoming the world’s top country in the number of physical locations accepting crypto.”

Eligma worked with Slovenia’s largest shopping mall BTC City to turn it into the world’s first “Bitcoin City”, with shops, cafes and entertainments all accepting payment in crypto. Visiting the huge shopping centre in the outskirts of Ljubljana in early February (several weeks before the coronavirus outbreak in Slovenia), it was easy to pay with the Elly mobile app at self-service checkouts. At the Tus supermarket’s self-service checkouts, for example, the option to pay with GoCrypto pops up alongside cash and card.

“In Slovenia, one could spend an entire day using a crypto wallet instead of a ‘normal’ one. Cryptocurrencies were envisioned as the electronic cash of the future, and that future is pretty much here,” according to the Eligma spokesperson.

And it’s not just in Ljubljana. The app shows all the places that accept crypto in the area, and dozens of shops and cafes popped up within a kilometre of my location when I visited Slovenia’s fifth-largest city Koper. Even in the small resort town of Bled, with a population of just over 8,000, there were several places to make crypto payments.

In total, as of the beginning of March 2020, over 1,000 locations offered payment with GoCyypto. The company listed stores and service providers including a ‘crypto golf course’, a ‘crypto driving school’, spas, grocery shops, theatres and car rentals.

GoCrypto’s launch was crowdfunded with a public crowdsale in May 2018 that raised $10mn, despite what the company said was the unfavourable market situation. Just over a year later, in September 2019, Eligma announced a €4mn investment by Bitcoin.com together with Roger Ver — the bitcoin-focused investor dubbed “Bitcoin Jesus” — and Swiss investment firm Pangea Blockchain Fund.

In addition to the hundreds of outlets in Slovenia, as of February GoCrypto was present at more than 100 locations in Croatia, and following the 2019 venture funding round also entered Bulgaria, the Czech Republic, Hungary, Portugal, Romania, Slovakia, Switzerland and the UK.

The company stresses that having retailers and other service providers willing to accept crypto payments is the key to getting crypto into the mainstream as a payment method used on a daily basis. Among the providers outside Slovenia to join the GoCrypto merchant network are Budapest-based craft beer producer BrewDog and the ferry service connecting people across Lake Lugano.

It is also still pressing ahead with an expansion into Latin America despite the pandemic. At the end of February, Eligma announced a partnership with payment gateway Xpay through which its platform is now available at nearly 200 locations in Colombia, Venezuela, and Argentina.

“Our aim is for GoCrypto to become a global infrastructure, championing simple use of cryptocurrencies and bringing together different crypto wallets, consumers and merchants in one payment solution,” said the company spokesperson. Ultimately, the company believes, crypto will become a payment option as common as credit cards.

Iran stands to be one of the winners of the new regional transportation map.