Kazakh President Nursultan Nazarbayev on September 11 appointed his eldest daughter Dariga Nazarbayeva to the post of deputy prime minister. The move will be pored over by those devoted to speculating about who will eventually succeed the 75-year-old Nazarbayev, who has ruled Kazakhstan with an iron fist since it gained independence from the Soviet Union in 1991.

Dariga Nazarbayeva, 52, is deputy speaker of the Kazakh parliament’s lower chamber, the Mazhilis, and has often been tipped to succeed her ageing father, though critics often pointed to her lack of executive experience as the main hurdle to leading the country. Following the early presidential election in April, in which Nazarbayev was re-elected with nearly 98% of the vote on a 95% turnout, Dariga was rumoured to be in line to become governor of the western oil-rich Aktobe Region, the governor of which was said to be in danger of the sack as punishment for delivering one of the lowest “yes” votes out of all regions. This would have provided her with the missing experience in governing.

Dariga’s prospects for succeeding her father were also seen harmed by her former husband Rakhat Aliyev, one of the most hated figures in the Kazakh establishment. But his suicide earlier this year in an Austrian prison paved the way for Nazarbayev to consider Dariga as well as her eldest son Nurali, who is a deputy mayor of Astana, as potential successors.

The prospect of keeping the presidency in the Nazarbayev family will likely be welcomed among the country's elite groups, who would prefer a smooth transition of power from Nazarbayev to either his daughter or grandson. The designation of a member of one elite group as successor over others, Kazakhstan watchers fear, could lead to a behind-the-scene or even an open fight between rival groups, which would destabilise the political situation in the country and lead to a redistribution of wealth and business interests. 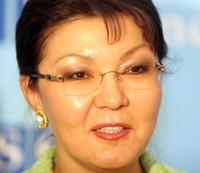