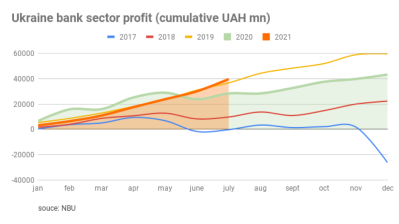 Ukraine's banks earned more money in July than in any single month in the last five years. Profits are surging more from banks retiring bad debt and releasing provisioned capital than from the crediting business. / wiki
By bne IntelliNews August 30, 2021

The profit of Ukraine’s banks surged to UAH9.7bn ($361mn) in July as the sector’s recovery starts to pull ahead of even their performance in 2019, the last year of strong growth.

Banks earned their best profits in five years after the coronavirus (COVID-19) pandemic pulled the sector back last year but apparently didn't do any permanent damage. The cumulative profits over the first seven months of this year were UAH39.8bn ($1.5bn), which was just head of the UAH36,7bn banks earned in 2019 and well ahead of the UAH28.4bn they earned in 2020. The sector had made a cumulative loss of UAH223 in the first seven months of 2017 and a meagre profit of UAH9.8bn in 2018.

In month-on-month terms July’s profits were also by far the strongest of the year. While the sector got off to a strong start in the first two months of 2020, earning UAH6.6bn and UAH9.3bn respectively, business collapsed in March after the oil shock and pandemic shocks hit, when banks earned only UAH97mn that month.

This year banks go off to a more modest start, earning well under half as much as they did a year before in January and February of about UAH3bn in both months but business picked up noticeably from April and May, when the sector earned about UAH6bn each month. As the summer arrived momentum picked again and profits were lifted to UAH9.6bn, the highest the sector has earned in a single month in the last five years.

The other metrics are also looking strong. Bank’s capital adequacy ratio, the amount of cash they keep on deposit to meet demand, was 21.7%, well over the 10% mandatory minimum and up from the low teens it was two years ago. However, the sector managed to maintain its capital adequacy ratios over 20% for all of 2020 thanks to the National Bank of Ukraine's (NBU) efforts to clean up the sector in recent years and banks were well able to weather the pandemic’s storm.

Non-performing loans (NLPs), the last big problem Ukraine’s banks need to deal with, have also been falling steadily. With over 90% of the bad loans provisioned for there is no danger of a systemic crisis, but as NPLs still form 37% of the loan portfolio a lot of capital that could be used for lending is still locked up. But with the NPL ratio falling from over 50% only two years ago more and more of this capital is being released and added to the bottom line, which is one of the sources of the super profits banks are earning at the moment.

Retail NPLs are trending down towards zero, but most of the most impaired loans are concentrated amongst the leading corporates and PrivatBank, which is still holding a large amount of the $5bn of what the bank’s management calls “fraud loans” that were a result of the cash whisked out of the bank by its former owners until it was nationalised in 2016. PrivatBank’s NPLs have also been shrinking but they still account for 71% of its loan book as of July.

Even with a lot of capital tied up against bad debt, the banks are still accumulating resources as deposits have continued to rise steadily and bank assets are up by half in the last two years.