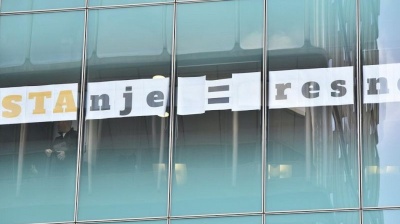 / Slovene Association of Journalists
By Valentina Dimitrievska in Skopje September 30, 2021

The director of the Slovenian news agency STA, Bojan Veselinovic, resigned on September 30, a move that prompted the journalists' association to threaten a strike if the rightwing government of PM Janez Jansa fails to fulfil its obligations towards the agency.

The Jansa government cut off funding for STA at the end of 2020, after Jansa accused it of unfair reporting. STA is supposed to receive funds for its public service activities. The European Commission has repeatedly expressed serious concerns about this issue.

The Slovene Association of Journalists said that the situation at STA had never before been more alarming.

Veselinovic stepped down after he rejected a government-proposed agreement, which he described as damaging for the agency.

He announced his resignation after talks with the director of the Government Communications Office (UKOM) Uros Urbanija on a public service contract for 2021, which were mediated by President Borut Pahor, ended unsuccessfully.

"I will never participate in the trampling of journalistic autonomy," Veselinovic said in a press statement.

“Basically, the dispute between the government and the STA has always been about its attitude towards media independence and an attempt to subordinate the agency. If the STA insists on its demands, it will undoubtedly succeed in court and the government will repay its debt at the latest,” Veselinovic underlined.

Following his resignation, the Journalists' Union of Slovenia urged the government to immediately fulfil due obligations, to start financing the STA public services and thus prevent its bankruptcy.

“If the government does not do this, we will start preparations for a strike,” they announced.

"Veselinovic’s resignation comes following the government's persistent efforts to symbolically and financially break the information backbone of the Slovenian media space, its professional, editorial and institutional independence," the union warned in a press release.

For more than 270 days, STA has not received payment for the public service provided, although payment is required by two laws.

"The money raised in the campaign for STA survival with public contributions has run out, and negotiations between the STA managment and the government's communications office have been closed. The agency is on the verge of bankruptcy and a completely uncertain future after several months of financial exhaustion, and the constitutional right of citizens to information is endangered,” they warned.

Meanwhile, STA reported that the bodies representing the staff at the agency urged those responsible to take action following Veselinovic's resignation by resolving the situation "in full compliance with the law while preserving the agency's institutional autonomy and editorial independence."

UKOM director Uros Urbanija reacted in a tweet saying that Veselinovic had no sincere wish to sign the public service contract and resolve the situation at the STA.

"Since there were no more arguments against signing the contract, he preferred to step down,” he said on Twitter.

The European Commission regretted the deteriorating situation and expressed concern over the latest development with STA.

“We have repeatedly expressed serious concern and expectation that the Slovenian government will ensure the independence and adequate funding of the STA,” Commission spokesman Christian Wigand was cited by Slovenian media.

First official results from Bosnian elections put nationalists ahead after exit polls predicted losses
20 hours ago
Georgian MPs want to rid the country of oligarchs, but not all of them
20 hours ago
Hungary agrees on deferred payments with Gazprom for winter gas deliveries
20 hours ago
US sanctions Russia’s CBR head Nabiullina and other officials
20 hours ago
Russia prepares for new attacks against Ukraine from Belarusian territory
21 hours ago