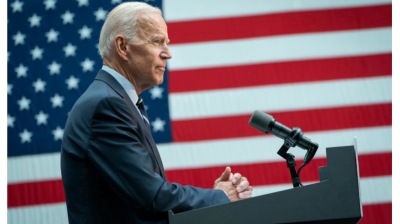 How do spell the name of Belarus' opposition leader: Svetlana Tikhanovskaya, Sviatlana Tsikhanouskaya or Sviatlana Cichanoŭskaja? The answer is not obvious
By Ben Aris in Berlin August 11, 2020

US presidential candidate and former Vice-President Joe Biden released a strong statement condemning the falsification of the Belarusian elections on August 10 and called for an end to the police violence against peaceful protesters that have taken to the streets.

He did so using the Belarusian spelling of the strongman’s name in a move that was designed to appeal to the protesters and carries an implicit rebuke for the country's president of 26 years. But getting the transliterations of Belarusian name right is proving a nightmare for sub-editors around the globe.

“Democracies are built on the simple concept that citizens have a right to elect their leaders and have a say in their country’s future. After suffering systematic repression for the past 26 years under the authoritarian regime of President Alexander Lukashenka, the people of Belarus are demanding their voices be heard,” Biden said in the statement.

Biden’s comments are interesting to observers of eastern Europe, because if he defeats US President Donald Trump in November’s elections he is likely to be a lot more engaged in the region’s politics than either of the last two presidents. Earlier this year it was reported that Trump “doesn’t give a sh*t about Ukraine,” according to Gordon Sondland, a former US ambassador to Ukraine.

Biden was President Barak Obama’s point man on Kyiv during the 2014 EuroMaidan protests that resulted in the ousting of President Viktor Yanukovych. He is a lot more familiar with the region than the majority of his colleagues and travelled to Kyiv where he gave a powerful speech to the Rada deputies, calling them to account and do the right thing by the citizens of the country.

The difference is likely to go down with opposition leaders and the general public that hold the nation’s sovereignty as a key plank in their reform demands and have widely rejected Lukashenko’s plan to create a “Union State” that would more closely integrate Belarus’ economy with that of Russia, including a single currency.

After much discussion bne IntelliNews has decided to go with the Russian transliterations, despite it being politically incorrect, for the purely pragmatic reason of being visible in Google searches, as almost no one uses the Belarusian version of the name.

The problems of transliteration are much worse in Belarus than they are with Ukrainian names, as the differences in spelling are much more extreme and there is no consensus on which of several transliteration systems to use.

The use of the Belarusian transliteration is unusual and so far even the State Department is sticking with the “Tikhanovskaya” version of the opposition leader’s name in the few statements where she is mentioned.

Most international newspapers have been using Kiev for years, “because of the chicken thing,” one editor at the Financial Times told bne IntelliNews, but more recently a growing number of publications have updated their style guides to “Kyiv” for reasons of political correctness.

During the Maidan protests in 2014 some US State Department statements began to use “Kyiv” in a show of solidarity with the protestors, but the practice has faded and “Kiev” continues to appear. Indeed, some US politicians continue to refer to “the Ukraine” rather than “Ukraine”, a big faux pas amongst Eastern Europe watchers: the former refers to a region of the Soviet Union; the latter is an independent country.

Apart from the intricacies of getting the spellings right, Biden went on to make a forthright criticism of the authorities' actions in Belarus.

“The Lukashenka regime has cut internet access, arrested protesters and independent journalists, and tried to muzzle foreign observers. These are not the actions of a political leader confident that he has won a fairly conducted election. But thanks to brave citizens – journalists, activists and ordinary people documenting these extraordinary events – we know the truth about the assaults on democracy being committed by the regime,” Biden said.

Some policy makers in the West have warned against being too hard on Lukashenko, as if he is totally cut off from Europe that will only drive him into the arms of the Kremlin. Biden’s remarks reinforce speculation that if he becomes president, the US will take a much tougher position on Russia than Trump and has already conceded Belarus to Putin’s camp.

“My administration will never shy away from standing up for democratic principles and human rights, and we will work with our democratic allies and partners to speak with one voice in demanding these rights be respected,” Biden concluded.