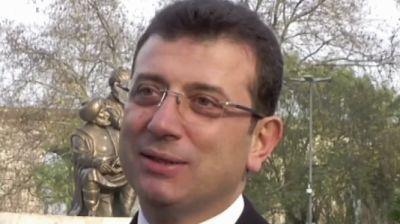 Ekrem Imamoglu accuses the AKP of presiding over huge misspending and waste during its many years in power in Istanbul.
By bne IntelliNews May 22, 2019

President Recep Tayyip Erdogan’s Justice and Development Party (AKP) spent Turkish lira (TRY) 80mn ($13mn) in three years on the Istanbul municipality’s website, according to the opposition politician voted in as mayor two months ago, only to see his shock victory annulled by officials acting on highly dubious claims of “irregularities”.

Ekrem Imamoglu said the expenditure was one of many examples indicating widespread misspending of billions of lira of public money by the AKP, which together with predecessor parties held the mayorship of Turkey’s business and cultural capital for more than a quarter of a century.

Imamoglu, from the main opposition Republican People’s Party (CHP), served less than three weeks as mayor before the High Election Board (YSK), supported by Erdogan—who is himself an ex-mayor of Istanbul—announced that the election for the mayorship would be rerun on June 23.

The opposition politician, who will run again to be mayor with the support of observers who feel an AKP victory would usher in the essential end of anything like a credible democracy in Turkey, on May 22 told a news conference: “So these 80 million lira were spent on Istanbul municipality’s website in three years. Well, we could set up websites for all of Turkey’s municipalities with this money.”

Throwing a spotlight
In throwing a spotlight on the AKP’s management of Turkey’s largest city during the party’s many years in power, Imamoglu is highlighting what he sees as extravagant and wasteful spending by a municipality with an annual budget of nearly $4bn.

During the mere 18 days he held the seals of office, the municipality cut water and transport fees, Imamoglu pointed out. “We’ll change this system of waste together. Istanbul Municipality is not the property of a handful of people,” he told reporters.

“I was in office for 18 days… you see how jealous some people are, they would crack in 1,800 days,” he added, referring to the mayor’s five-year term.

Istanbul’s debt has expanded by 4.5 times to TRY27bn since 2014 while its annual budget deficit has soared 20-fold to TRY4bn, Imamoglu also said. If there was proper budget management, approximately TRY5bn could be saved and spent on residents, he added.

Reuters said Istanbul municipality has previously defended its record and denied specific accusations that it overspent on cars for management, saying some of the vehicles were used by employees of vital services including the city’s waterworks.

Official justification
Separately, May 22 saw YSK electoral officials finally release their official justification for why the original, March 31 Istanbul election results were annulled. Western allies of Turkey, including Germany, have desribed the move as incomprehensible, but the 250-page document claimed identified irregularities were sufficient to have an impact on the poll’s outcome.

Emphasising that there is a legal requirement for the heads of polling stations to be chosen from the official list of civil servants, the document concluded that in fact Istanbul polling station chiefs were appointed in an illegal way for 754 ballot boxes. Imamoglu won by just 13,729 votes.

Seven members of the electoral board voted in favour of the annulment, while four opposed it. Those against the move included YSK head Sadi Guven. He said the irregularities were not sufficient to justify voiding the election.

“Appeals after the election as regards the formation [of polling station committees] cannot alone be brought forward as a reason to annul the election,” Guven said in the YSK statement.

Critics have also noted that the very same so-called irregularities have featured in other elections, including last year’s re-election of Erdogan as president. YSK officials have declined to make a move as regards that complaint.