ISTANBUL BLOG: Talk of a Turkey default grows as spooked investors ask ‘What comes next?’ 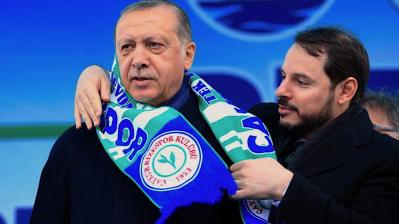 Still in the game despite that Istanbul 'yellow card': President Erdogan (left) and his son-in-law and finance minister Berat Albayrak.
By Akin Nazli in Belgrade May 22, 2019

By now there’s an unmistakable foreboding on the markets that Turkey is heading towards a default. As the government rolls out yet another pre-poll stimulus—this time as the ruling AKP moves to delete the humiliating loss it suffered in the Istanbul election in a poll rerun scheduled for June 23—and comes to terms with how it has killed off international and domestic financing channels, the sense of dread grows and the discussion on its possible bailout options grows louder and louder.

Foreign financiers were wounded by Ankara during the run-up to the end-of-March local elections when during frantic efforts to defend the Turkish lira (TRY) before polling day Turkish officials resorted to shutting down the lira swap market in London, leaving traders up a shabby creek without a paddle. Meanwhile, going back to last November, government shenanigans on the domestic bond market have systematically spooked private investors.

Officials probing unorthodox channels to finance the state budget reportedly last week gave up on a plan to tap the central bank’s legal reserves after even word of the plan undermined the lira, while at the same time Bloomberg was reporting that the government was ‘kindly’ requesting that local private lenders buy government bonds at domestic debt auctions for less than market prices.

In other news with added-jitter-potential, revenue-starved officials have essentially made the offer of avoiding military service in return for a payment permanent, and a set of taxes, including a Tobin tax, are being pushed through, but how quickly is as yet unknown, as is how much money could realistically be generated.

Struggling for oxygen
Turkey is by now struggling for oxygen in its bid to support the battered lira, which has lost more than 40% of its value over the past two years. With the foreign currency reserves running low, investors are logically trying to map out Ankara’s remaining options for turning the tide. Reuters analysts made that plain on May 21 in an op-ed entitled “Turkey: Where to go when the cash runs low”. In the piece, some unnamed analysts estimated the government would have to find some $40bn-$90bn to avoid a sovereign default.

Turkey’s current situation is “for many economists, a textbook emerging market currency crisis”, the article added. Observers might recall how Ankara found itself up against the balance of payments (BoP) crisis last August after the final trigger was pulled by the row between President Recep Tayyip Erdogan and Donald Trump over the detention of US pastor Andrew Brunson. However, it really is questionable, Brunson or no Brunson, as to whether Turkey ever had much of a hope of avoiding a lira collapse given its years-long credit-fuelled boom. And now the speculation is that this summer’s ‘Brunson’ could be the row between Erdogan and the US over the impending delivery to Turkey of Russian S-400 missile defence systems that pose a security threat to Nato hardware. It’s certainly handy for politicians who’ve botched their nation’s economy to have these supposedly decisive geopolitical issues to point to.

Textbook mishandling
The Turkish government’s mishandling of the crisis might also be said to be a textbook case. It is still demanding lower interest rates while attempting to put the brakes on the currency depreciation. It also bangs its head on the brick wall of basic economic theory by demanding both a recovery from double-digit inflation and recession at the same time (at this point, fight inflation and tolerate a far heavier recession, or fight recession and accept hyperinflation is unavoidable). And it holds its nose at the idea of going to the IMF for a rescue, while putting itself at odds with the very domestic and international market players it needs to help it try and avoid such a fate.

According to the Reuters analysts, the government has four options right now: borrowing time on the capital markets, the IMF, capital controls or a policy rate hike.

The government’s borrowing costs may have shot up but Turkey is nowhere near being locked out of the international capital markets as yet, according to the news service. “With a relatively comfortable debt to GDP ratio—expected to climb to around 35% by year-end, which is lower than most heavyweight emerging market countries—it could look to secure some cash and replenish some of its spent reserves.”

In the latest 10-year eurobond auction held in January, the government paid a yield of 7.68% to raise $2bn. The issue now yields more than 8% and debt capital markets bankers and fund managers now reportedly predict Turkey would have to pay an additional 40-60bp for any new issue.

But the Erdogan administration does not think about tomorrow. It is for ever struggling to save the day. That has, at least, been the case since 2013. So, if the overarching need to access some cash is there, the nod to pay the extra yields is all too possible.

How it could it be any other way?
Erdogan’s stance against the IMF—this glorious president said never again would Turkey need the institution, so how could it be any other way?—and his unsuccessful attempts to secure some financial support from a series of countries, including Qatar, China and Germany since last summer, are there for all to see in the rear-view mirror. So now, his game plan needs those capital controls.

No capital controls, you say? It seems that the international markets want Erdogan to step in front of the cameras and announce that he has indeed introduced capital controls to believe they are there. But there’s really no need. If closing down the London lira swap market, bringing in a Tobin tax, controlling FX purchases higher than $100,000, imposing deposit and lending rate ceilings on banks, pushing private market makers to buy government bonds at lower than market prices, launching fruit and vegetable stalls to combat the private sector with fixed state prices, imposing price controls, raiding onion warehouses and so on are not capital controls then I apologise and will start this article again forthwith.

There is also a big question mark over how another policy rate hike would now help as the central bank’s monetary policy is dysfunctional in the face of massive dollarisation, the government’s interest rate ceilings placed on lenders and officials’ manipulation of the domestic debt markets.

“We think that other measures will replace the monetary tightening as the local election taking place next month is another political inflection point. As a matter of fact, we believe that Turkey will move closer to controlling the market via regulatory measures instead of high benchmark rates. The short-term impact of such a substitution strategy on the local exchange rate is questionable. However, in the mid-term this should bring down FX volatility,” Sebastian Petric of Raiffeisen Bank said on May 22.

Bringing down FX volatility by regulating the market is actually an interesting perspective. Mr. Petric could think of investing in Iranian debt as FX volatility is zero in the country when the FX black market is overlooked.

Waking up to puzzling inflation rates
It is also notable that Reuters shows signs of waking up to how, through the official lens, Turkey’s inflation rate is puzzlingly slowing in an import-dependent environment where the TRY has lost around 13% of its value against the USD so far this year.

Although Reuters referred to the way being open for eurobond sales with higher costs of 40-60bp, Bloomberg was harsher on May 22 in an op-ed entitled “Turkey Burns Bridges With Markets as Costs of Lira Defense Mount”.

“Turkey has already shown that it doesn’t care if real money can’t hedge properly,” he added.

By now, both Reuters and Bloomberg show little hesitation in pointing to the Turkish government’s currency and interest rate manipulations—it’s been going on for more than six months.

The next step is to question the reliability of the official inflation figures. Reuters is heading up that path.

Interestingly, Global Capital reiterated on May 21 that “investors react to headlines, but bank relationships tend to be stickier”.

“Turkey is the perfect example. Despite the currency crisis that rocked the Turkish economy and sovereign bonds last August, international lenders remained committed to funding the country's banks with which they have long-established relationships. While investors sold Turkish sovereign bonds as fast as they could in the run up to the local elections in March, lenders held steady, even providing Turkish borrowers with tighter margins on their semi-annual refinancings. Secondary loan market spreads widened only a little.”

However, it should be observed that the global lenders are only providing their Turkish peers with debt roll-overs at lower ratios and Turkey has been a net loan payer for a while. So, no additional cash is actually available from the foreign loans.

Finally, the jaundiced eye should not err in looking away for too long from that handy “net errors and omissions” item in the BoP accounts. During Erdogan’s rule, unknown money has so very often flowed into Turkey at opportune moments.