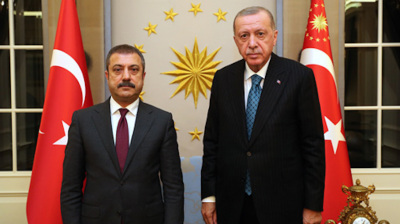 Kavcioglu, left, was at Erdogan's palace on October 13. He responded harshly to those who claimed that the president was not happy with him. / Turkish Presidency.
By Akin Nazli October 14, 2021

Earlier in the evening, central bank governor Sahap Kavcioglu was at the palace meeting with the president.

High-level bureaucrats in Turkey know the axe can fall at any time, particularly in central banking. Erdogan, after all, before appointing Kavcioglu in March, got through three central bank chiefs in less than two years. And the turnover on the MPC overall is dizzying.

In the same decree, Erdogan also said that he had appointed Taha Cakmak as a central bank deputy governor and Yusuf Tuna as MPC member.

It seems that the MPC may have to make do with one less member (critics who contend Erdogan calls all the monetary shots anyway will say that won’t actually be much of a problem. In fact, why not do away with the rate-setting board and save the taxpayer some money).

Last week, the Financial Times claimed Tumen, appointed in May, looked set to replace the central bank incumbent governor. It seems that the British daily missed a beat. Yavas, meanwhile, did not attend the latest MPC meeting held on September 23 when the policy rate was cut 100bp to 18% despite inflation heading north.

But, come on mainstream media… these names, Ahmet, Mehmet or Sahap are actually not too important; surely you know that by now. Turkey is diving deeper and deeper into the tragicomedy of Erdogan’s banana republic and the lira will depreciate further.

The USD/TRY pair, which had been hovering just past the 9-level, saw the 9.18s following Erdogan’s surprise.

With or without extra surprises, the lira will not get off the depreciation track. But adrenalin lovers, you are in business. Erdogan can at any time come up with a late-night surprise to add a pinch more volatility.

Some of those lira traders deserve a bit more credit. There they are, hanging about their desks, waiting for the Official Gazette and reacting instantly to those surprising decisions—because they know that in Turkey everything is normal.

The next MPC rates meeting is set for October 21 at 14:00 Istanbul time. Who might not turn up?