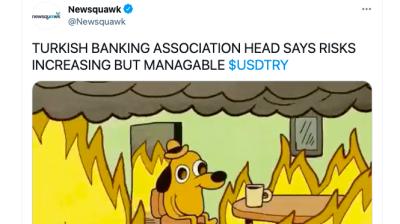 Is there anyone left on the planet who hasn’t commented on Turkey’s economic tumult? March 25 brought the fourth trading day since President Recep Tayyip Erdogan set off the noisy commotion with his third firing of a central bank governor within two years, sacking a chap global markets had taken a shine to as they thought he had finally convinced the Boss he needed to get serious about fighting inflation. It’s proved a gripping story, but the fourth day definitely brought signs that there is nothing left still to be said about the upheaval and audiences are getting bored by the media punditry and talking heads.

The risk of fast contagion spreading from the Turkish economy to other markets amounted to a short-lived fear but that just underlines how Turkey, during Erdogan’s 18 years at the wheel, has always been a slow-motion car crash. And the real Turkey watchers are aware that this is just the beginning of the end for the country, not the end in itself. The Turks are starting to pay the bill for the horrendous economic mismanagement that most stakeholders, the global markets included, were only too happy to turn a blind eye to while the short-term profits rolled in.

The market close on Friday (March 26) will come as a godsend. Speculation over a cabinet reshuffle, meanwhile, is growing. But there is too much talk and not enough information.

Another weekend shock for Turkey remains a risk if Erdogan’s son-in-law Berat Albayrak—who quit as finance minister in November as the acrid smoke from his burning up of the country’s FX reserves became too unbearable not to mention-- returns to the fold.

There again, nothing about Turkey should really come as a shock, not while the Boss of Shocks remains in the Ankara palace. But, with or without Albayrak, our job remains to point to possible causes of additional market stress, especially amid the huge dust clouds sent up by excitable and wayward coverage by too many in global media.

The first risk item is imminent. US President Joe Biden is all set on March 25 to give his first press conference since entering the White House in January. Scheduled to begin at 20:15 Istanbul time, it may well include the Turkey question. Any plain speaking from Biden, who has not called Erdogan during his first two months as president, could add pressure to the already shaken and bruised Turkish markets.

Domestic government bond yields remained high at 18-20% across the curve.

The Borsa Istanbul extended its up-tick rule on short sales into a third day. Let’s not each day treat this as a surprise. You might say its the only explainable financial policy in the country.

The real story right now as regards the many ever-suffering Turks should be that another inflation tsunami is on the way. The positive thing for the regime here is that its official statisticians use methodology that is immune to actual price developments. If you want to make a Turk in the know laugh, tell them that inflation stands at slightly short of 16%, up from 12% prior to the November appointment of the central bank governor just given the boot by Erdogan. Actual inflation in Turkey is almost certainly north of 30%.

The latest new economic team will have their first official inflation figure, covering March, on April 5. Then, on April 15, comes the first rates meeting.

On March 25, local business daily Dunya, which can be considered the voice of the Turkish real sector, reported that all industries, from textiles and automotive to furniture, chemicals, plastics, food and construction are getting ready for another surge of huge price hikes following the fresh currency depreciation that has added to already booming commodity prices, supply shortages and logistics problems.

Erdogan told a gathering of his AKP party on March 24 that the economic turmoil visited on Turkey does not reflect the country’s economic reality. Well, he’s right there. If it did, the markets would go absolutely haywire.

ISTANBUL BLOG: Portfolio outflows decline but Turkey not out of the woods yet
ISTANBUL BLOG: Official inflation bumps up to 16.2%
ISTANBUL BLOG: Bourse keeps foot on throat of short sellers on third day of Turkey tumult