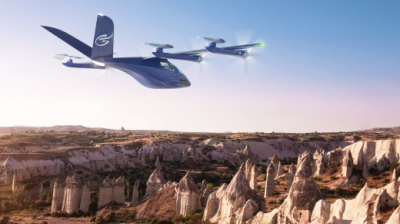 Soon to be seen above Istanbul? / Vertical Aerospace.
By bne IntelIiNews March 29, 2022

Under the partnership, Gozen will buy or lease up to 50 battery-powered eVTOL aircraft from Avolon, with options to purchase or lease another 50. The aircraft, valued at around $2bn, will be acquired by Dublin-based Avolon from British firm Vertical Aerospace.

Gozen, which also has a travel agency business, said it sees potential in reducing the environmetal footprint of tourists going to attractions such as Troy and Cappadocia.

Avolon is among the launch customers for up to 1,000 eVTOL aircraft being developed by Vertical Aerospace, which went public in New York in December after completing a $2.2bn SPAC deal with Broadstone Acquisition Corp. In June last year, Avolon ordered 500 VX4 eVTOL aircraft from the Bristol-based company and went on to announce deals to place them with Japan Airlines, AirAsia, and GOL in Brazil, Reuters reported.

Vertical has targeted certification for 2024.