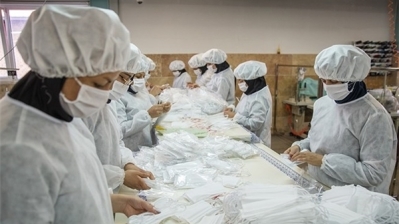 Iranian student volunteers producing masks for poor neighbourhoods inside the former US embassy in Tehran.
By bne IntelIiNews March 17, 2020

An Iranian state television journalist who is also a medical doctor on March 17 warned that the coronavirus (COVID-19) outbreak could claim the lives of "millions" in Iran if the public keeps ignoring advised restrictions on travelling and other health guidance.

Dr Afruz Eslami gave the warning only hours after hardline Shiite faithful pushed their way into the courtyards of two major shrines that had just been closed over virus fears. Meanwhile, Iran's supreme leader issued a religious ruling prohibiting "unnecessary" travel in the country. Iran, a country of 82mn, on March 19 starts its long Persian new year Nowruz holidays that extend into April. A surge in travel as people head to family gatherings can be expected.

Roughly nine out of 10 of the more than 18,000 COVID-19 cases confirmed across the Middle East come from Iran. By the end of March 17, Iran had recorded 16,169 infections and the deaths of 988 people infected with the coronavirus.

Eslami cited a study by Tehran's prestigious Sharif University of Technology. lt advanced three scenarios. The first is that if people begin to cooperate now, Iran will see 120,000 infections and 12,000 deaths from the COVID-19 epidemic. The second is that if they offer medium cooperation, there will be 300,000 cases and 110,000 deaths. The third is that if people fail to follow any guidance, Iran's health system could collapse. Eslami envisaged a situation in which "medical facilities are not sufficient” and said that in the constructed hypothesis there would be four million coronavirus cases “and 3.5 million people will die".

Eslami did not detail what metrics the study used, but the fact that it was reported by Iran's tightly controlled state television broadcaster underlined the gravity of the epidemic Iran faces.

US Secretary of State Mike Pompeo on April 30 called on countries to deny overflight rights to Mahan Air, an Iranian airline under US sanctions. He said Mahan Air recently delivered cargoes of ... more