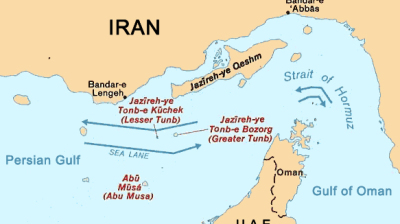 By shipping most oil exports from a facility on the coast of the Gulf of Oman, Iran can greatly cut the number of tankers it needs to send through the Strait of Hormuz chokepoint. / Derivative work of CIA map, Pascal, wiki
By bne IntelliNews September 4, 2018

Iran is replacing its main oil export terminal located deep within the Persian Gulf with a facility on the coast of the Gulf of Oman, President Hassan Rouhani said on September 4.

The move is intriguing in that most energy exports from Persian Gulf countries have to pass through the Strait of Hormuz to reach the open ocean. Iran in recent weeks has several times indicated that it would be prepared to blockade the waterway should the US attempt to shut off world oil markets to Iranian crude exports—due to take effect on November 5—impact on the Islamic Republic’s lifeline oil revenues. Conceivably, the opening of a replacement main oil export terminal on the Gulf of Oman—a marginal sea that is part of the Indian Ocean—could leave Iran able to ship big volumes of oil, but Saudi Arabia, Iraq, Qatar, Kuwait and the United Arab Emirates unable to export vast volumes of oil and gas.

Rouhani announced the terminal switch as he opened a new energy complex in Asalouyeh, a city on the Persian Gulf coast. He said some export orders had already been shifted to the replacement facility and the transfers would be completed by the end of his second term as president in 2021.

The facility on the Gulf of Oman, sometimes referred to as the Sea of Oman, is in Bandar-e-Jask.

Rouhani in July said Iran has always guaranteed the security of the Strait of Hormuz, but warned that the US "should not play with the lion's tale". In late August, Iranian General Alireza Tangsiri, head of the Islamic Revolutionary Guard Corps (IRGC) naval forces, told Tasnim News Agency that Iran has control of the Gulf and the strait and warned the US Navy to not have a presence there.

US Secretary of State Mike Pompeo rebuffed that claim on Twitter, stating: “The Islamic Republic of Iran does not control the Strait of Hormuz.”

Some 35% of all global oil exports pass through the strait, according to US estimates, making it the world’s most important oil chokepoint. An IEA 2016 estimate showed 18.5mn b/d of oil were shipped through the strait. If it proved unpassable, oil prices would skyrocket across the globe.

The last time there was a major disruption to the flow of oil through the strait was in 1984 during the Iran-Iraq war when both sides bombed each other's oil facilities and tankers.

In further remarks relayed by state television, Rouhani was defiant in the face of the imminent threat by the US to block Iranian oil exports, saying: “We will continue by all means to both produce and export… Oil is in the frontline of confrontation and resistance.”

Since May, when Donald Trump walked out of the Iran nuclear deal and announced the sanctions snapback, there has been a marked reduction in Iranian oil exports. Between August 1 and 16, total Iranian oil and condensate exports sank by an average 600,000 barrels per day (b/d) compared to July loadings, largely due to greatly reduced flows to India, Platts cFlow preliminary tanker tracking data shows. Overall exports amounted to 1.68mn b/d in contrast to the July average of 2.32mn b/d.

In the last era of oil industry sanctions, the OPEC nation disabled tracking systems on its fleet of tankers, concealing destinations and volumes of oil exports. Millions of barrels of Iranian oil were unaccounted without the trackers.

Almost 200,000 barrels a day of the country’s post-sanctions oil sales could be undisclosed, Robin Mills, chief executive officer of consultancy Qamar Energy in Dubai, told Bloomberg on September 3. “Exports at these levels will be important in cushioning the financial blow to Iran, but will not have a major impact on the world market.”

The news agency’s report also noted that China, Turkey and India would likely continue to buy Iranian oil after the resumption of sanctions, with China’s smaller refineries taking some of the murky, undisclosed shipments, according to Iman Nasseri, managing director of the Middle East at FGE London. In total, Iran could export 800,000 b/d well into 2019, including some 20,000 barrels sent by trucks to Iraq, Afghanistan and Pakistan, he said.