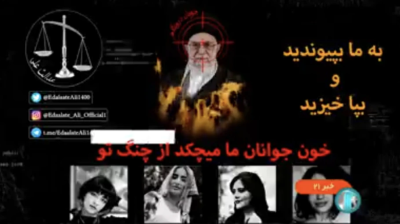 Screenshot of the protest banner that interrupted the 9 o'clock news. / bne IntelliNews
By bne IntelIiNews October 9, 2022

Iranian state TV’s Saturday night news bulletin was on October 8 hacked live on air, with the programme interrupted by the appearance of a mask on the screen, followed by an image of Supreme Leader Ali Khamenei in crosshairs with flames around him and the words “Lying shepherd”.

A group calling itself "Adalat Ali", or Ali's Justice, claimed responsibility for the several-second ‘hactivist’ intervention that included the playing of a protest anthem.

The protest material broadcast in the hack at  21:00 local time included the words “Women, life, liberty”, which has become the slogan of the nationwide anti-regime protests in Iran that are now in their fourth week, and also “Join us and rise up. Under the image of Khamenei were also the words, "The blood of our youth is dripping off your paws," and photographs of slain protesters.

Semiofficial Tasnim News Agency reported that the state TV news broadcast "was hacked for a few moments by anti-revolutionary agents".

Hassanein Haddad, a spokesman for Iran State Radio and Television, claimed it was wrong to call the incident a hack as it was an act of "vandalism and infiltration" from within the channel itself.

Also on Saturday, unverified social media videos appeared that seemed to show female students at a university in Tehran chanting "get lost" during a visit by President Ebrahim Raisi. Women and members of Generation Z (roughly those born from 1997 to 2012) are seen as leading the protests. Schoolgirls in the past week have taken an increasingly big role in keeping up the momentum of protest.

Earlier in the day, a man shot dead in his car after he sounded his horn in support of protesters was one of two people killed in Sanandaj, the capital of Kurdistan province. Police in Sanadaj said a man had been killed by "counter-revolutionaries", according to state-run news agency IRNA.

Partly in order to disrupt those looking to spread the unrest, Iran has been introducing sweeping internet and social media blackouts almost since the protests began. Activists inside and outside Iran have been looking for ways to maintain internet connections despite the disconnections deployed by the authorities. TechCrunch reported on October 5 how one group of activists has come up with a new approach involving the use of ‘Trojan Horse’ Tor servers inside Iran.

On October 6, Paris-based Eutelstat alleged Iran was jamming two its satellites, impacting the transmission of several digital TV and radio channels broadcasting in Persian from outside of Iran, as well as other channels.