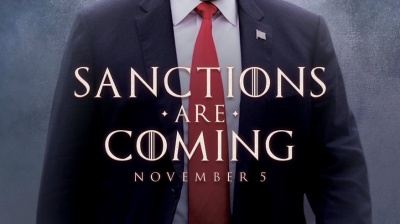 Game of Thrones producer HBO responded to Trump's use of its imagery by saying it "would prefer our trademark not be misappropriated for political purposes". / twitter, @realDonaldTrump
By Will Conroy in Prague November 3, 2018

Some things require little analysis. Let’s just ask what kind of a jerk would take pleasure in mimicking a Game of Thrones advertising campaign—“Sanctions Are Coming, November 5”—in a way that will have the effect of menacing ordinary Iranians with the prospect of more economic misery.

And let’s be done with it, for the plain fact is that on November 2, without giving any guarantees for supplies of basic foods and medicine, Donald J. Trump announced that in three days’ time all US sanctions removed under the 2015 nuclear deal would be reimposed on Iran.

The referencing of the fantasy TV series’ meme—“Winter Is Coming”—which the HBO TV network and stars of the hit show immediately objected to occurred as the US president warned the Islamic Republic was about to face "the toughest sanctions regime ever imposed on Iran" with the existing sanctions targeting to be expanded to include the country’s oil, gas, petrochemicals, shipping and banking sectors.

The one concession was that eight countries—which various news agency reports said would include Turkey, India, Italy, Japan and South Korea—would not be penalised by the US for continuing to import Iranian oil, although they would be expected to gradually reduce shipments to zero.

According to the IMF, the US sanctions campaign has already plunged Iran into recession, and one might think that a civilised nation would need to form some kind of international consensus before subjecting a country of 81mn people to such distress. But Washington, aside from the vocal support it receives from a few allies such as Israel and Saudi Arabia, is going it alone. The other five major powers that signed the nuclear accord that is supposed to shield Iran from crippling sanctions—France, Germany, the UK, Russia and China—have stayed in the agreement, pointing out that the Iranians remain in full compliance with its measures restricting the Iranian nuclear development programme.

Perhaps, just perhaps, the Trump administration might ease up on Iran a little when the campaigning fever dissolves after the November 6 US midterm elections, but don’t count with it. On November 2, it also emerged that European governments have so far failed to persuade the White House to ensure Iran will remain able to take delivery of basic foods and medicine after the imposition of the blanket sanctions.

“Thousands of patients… at risk”
“There’s no doubt that the lives of thousands of patients will be at risk,” Ahmad Ghavideh of Iran’s haemophilia society told the Guardian by phone from Tehran after the newspaper discovered that the UK, French and German ambassadors to the US made joint visits to the American Treasury and State Departments in September in an unsuccessful effort to persuade the administration to produce a “white list”. Such a list would give clear guidelines on what channels European banks and companies should follow to conduct legitimate transactions with Iran without fear of future penalties.

Humanitarian supplies are officially exempted from the sanctions, but risk-averse foreign banks and companies have in the past steered clear of all transactions with Iran for fear of being penalised. Severe shortages of life-saving medicines and food staples were experienced by the country in the years preceding the 2015 agreement endorsed by Trump’s predecessor Barack Obama.

“We are expecting our American friends to make some gestures on humanitarian goods,” Gerard Araud, the French ambassador to Washington was quoted by the newspaper report as saying. “Of course humanitarian goods are not sanctioned. But the fact is the banks are so terrified of sanctions that they don’t want to do anything with Iran. It means that in a few months, there is a strong risk that there will be shortage of medicine in Iran if we don’t do something positive.”

Official line
The official line from the Trump administration is that this toughest ever sanctions assault has not been engineered to deliver regime change in Iran, but it’s common knowledge among diplomats that White House National Security Advisor and uber-hawk John Bolton believes the regime will collapse.

That, however, is highly debatable. US officials spend a lot of time making the case that the Iranian people are biding their time awaiting outside assistance that will enable the toppling of the powers that be. But if great swathes of the population are so deeply unhappy with the system—a parliamentary democracy vetted and supervised by a theocracy headed by an unelected supreme leader—why is it that the Iranians show such immense enthusiasm come general election time (in the May 2017 poll, centrist and pragmatic President Hassan Rouhani was re-elected with a landslide on a turnout of more than 70%)?

Indeed, so out of touch with the feelings of ordinary Iranians is the Trump regime (apologies for that slip of the key) that its Iran strategy has even included aligning with the cult-like Islamic-Socialist Iranian opposition group Mujahedin-e-Khalq (MeK). The MeK has no support of significance in Iran. It is a fringe group which lost out on the spoils after the 1979 Islamic Revolution and achieved deep unpopularity among the Iranian people by taking Iraq’s side in the Iran-Iraq war of 1980-88. The last most people had heard of it before Trump’s surrogates started appearing at its rallies was that it had gone into exile in Albania.

Whipping boy
But why dwell on such distractions? One thing is clear right now and that is that Iran has become America’s number one whipping boy (the egregious sins of other players in the Middle East, such as Israel and Saudi Arabia, be damned) and it has a bully pulpit list of 12 demands from US Secretary of State Mike Pompeo that it must comply with—or else.

The list—which is in fact by design clearly a non-starter for Iran—includes tighter restrictions on nuclear and ballistic missile development and the reversal of decades of foreign policy underpinned by financial and logistical support for US-designated terrorist groups and regional allies, including Hezbollah in Lebanon, Shiite militias instrumental in defeating ISIS in Iraq, Houthi rebels in Yemen and President Bashar Assad in Syria.

In Washington’s eyes, even though Iran is in the Middle East it is not allowed to defend its interests in the Middle East. Perhaps it should start taking more of an interest in Venezuela? “They are maximalist demands and no Iranian government would be willing or able to accept them,” Robert Einhorn, a former US official now at the Brookings Institution, told Reuters on November 1.

Trump wants Iran’s government to capitulate or collapse, Einhorn reportedly added, saying: “They are not going to knuckle under. But if the administration began to signal some flexibility ... it’s possible the Iranian regime would agree to enter into talks.”

EU’s collective resolve “unwavering”
On November 2, EU foreign policy chief Federica Mogherini issued a joint statement with the British, French and German foreign ministers in which they stated how they “deeply regret” the reimposition of the US sanctions and would continue working on ways of keeping legitimate trade with Iran going.

“Our collective resolve to complete this work is unwavering,” the statement added.

President Rouhani, while pledging that Iran will show resilience, patriotic spirit and ingenuity in resisting the US economic attack, has also spent the past couple of days bracing Iranians for hard times. The Iranian lira has already collapsed and runaway inflation is taking hold. “I cannot even buy rice to feed my children or pay my rent,” elementary school teacher Pejman Sarafnejad, 43, a father of three in Tehran, was quoted by Reuters as saying on November 2.

Unmistakably, the immediate horizon looks perilous for Iran, but while Trump may have the whip-hand at this moment in time, analysts question whether, longer term, the US will emerge the victor having shown such disparaging disdain for multilateralism.

The sanctions, runs the theory, have potentially opened the way for a historic change in the global financial system. If Europe succeeds in creating a financial mechanism for trade with Iran that is separate from the US dollar, other states can start using euros for trade with the Iranians, dealing a blow to US domination of global markets.

Not only that, but Trump’s scorning of international agreements such as the painstakingly negotiated nuclear deal might prompt a shift in international power politics, with other major nations moving for a switch from an American-led system to a multi-polar world. Trump might end up laughing on the other side of his face. At that point, of course, he should be presented with a courtesy copy of Game of Thrones for Dummies. Or Cruel Bastards, whichever is thought more apt.

Kazakhstan’s food security hopes for the world undermined by food insecurities at home
Romania’s public debt hits 50% of GDP at end-May
The birth of a Kazakh banking empire: ATF Bank