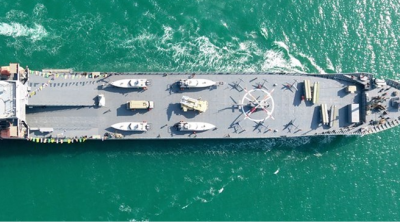 Bound for the high seas? The Guard's new warship, the Abdollah Roudaki, named after a slain commander.
By bne IntelIiNews November 20, 2020

Iran has requested that allies across the Middle East be on high alert and avoid provoking tensions with the US that could give an outgoing Trump administration cause to launch attacks in the US president’s final weeks in office, Iraqi officials have said, The Associated Press reported on November 20.

The request from Tehran demonstrates the growing regional anxiety over President Donald Trump’s unpredictable behaviour and the uncertainty in the chaotic transition period until President-elect Joe Biden takes over on January 20. It was reportedly delivered by Iranian General Esmail Ghaani, head of the Islamic Revolutionary Guard Corps’ (IRGC’s) expeditionary Quds Force during a meeting with Iranian-backed Iraqi militia factions and Shiite politicians in Baghdad this week.

The message was said to be ‘Stand down to avoid giving Trump the opportunity to initiate a fresh tit-for-tat round of violence’, with the Iraqi Shiite paramilitaries also advised ‘Be calm and cease attacks for now against American presence in Iraq.’

On November 19, an adviser to Iran’s supreme leader warned in an interview with The Associated Press that any American attack on Iran could set off a “full-fledged war” in the region.

“We don’t welcome war. We are not after starting a war,” Hossein Dehghan, who served in the IRGC before becoming a defence minister under Iranian President Hassan Rouhani, was quoted as saying.

Separately, the IRGC said on November 19 that it launched a heavy warship built to carry helicopters, drones and missile launchers and capable of patrolling the Indian Ocean. Normally, ocean patrols are left to Iran’s navy while the IRGC’s naval force only conducts patrols in the Persian Gulf. But the Guard said it would use the ship, named after slain IRGC naval commander Abdollah Roudaki, for deep-water patrolling.

The commander of the Guard's navy, Admiral Ali Reza Tangsiri, said: "Presence and assignments in the Indian Ocean is our right."

Some local media reports have suggested the ship could almost be classified as an aircraft carrier, but that appears to be a rather overblown description. The ship does not have a runway, though it includes a landing pad for a helicopter.

The US Navy patrols the waters around Iran by deploying its Bahrain-based 5th Fleet.

In a parting shot, Iran imposed sanctions on US President Donald Trump on the eve of the January 20 transfer of the American presidency to Joe Biden. Trump and a number of members of his ... more

Iranian Foreign Minister Mohammad Javad Zarif on January 17 lashed out at claims from French counterpart Jean-Yves Le Drian made in an interview with the Journal du Dimanche that Iran is building up ... more