With arguably the most famous surname in the Turkish business world and a family business empire that guarantees a comfortable income, Ali Sabanci could be forgiven for taking life easy.

Instead, the past eight years has seen him propelled from the shadow of his better known relatives, to one of the most recognisable faces in Turkey after he succeeded in creating the fastest growing airline in Europe, in a country few believed had an appetite for air travel, let alone the no-frills budget variety.

"My goal in life is to play the best game I can with hand I've been dealt," he grins, pointing out that in just eight years he has succeeded in growing the tiny Turkish charter carrier Pegasus that his family holding company Esas Holding bought for €60m in 2005 into a major regional carrier straddling four continents with a market cap of $1.6bn.

Not bad for any business, but all the more remarkable for one operating in Turkey in a sector with a notoriously high level of failure. "There have been a lot of attempts at setting up airlines, but actually these were not really 'low cost' -there's a big difference in the two concepts," says Sabanci, pointing out that most of the 20 odd airlines started in Turkey in the 1990s and 2000s began as tour operators looking to increase margins by expanding vertically, but who failed to address the issue of how to fill planes in the off season.

"They didn't realise that it's a consumer business, you have to be in front of your customer all the time, and you have to sell," says Sabanci explaining that as air travel has become increasingly commoditised, the difference between running an airline, and a supermarket or hotel has narrowed.

Sabanci points to the innovation of South West Airlines in the US from the 1970s onwards and subsequently in Europe by Ryanair and Easyjet as creating a model which Pegasus has adapted to Turkish market conditions. He brought in former Ryanair group operations director Conor McCarthy and former Easyjet administrative manager Raymond Douglas Webster to sit on the Pegasus board.

Key to success, explains Sabanci, has been adapting the existing "no frills" model to the more complex and less developed Turkish market, taking advantage of the aspirations of the country's rapidly expanding middle class to offer fast, cheap domestic flights to people who might otherwise have spent 20 hours travelling on a bus, while providing affordable flights to major international destinations to Turks for whom foreign travel was an unheard-of luxury. At the the same time, it could answer the needs of the Turkish business community who need to travel economically to major trading partners, the Turkish diaspora in Europe who want cheap connections home, and not forgetting tourists looking for cheap flights into Turkey.

Central to the model itself has been the standard "no frills" tactics of "dynamic pricing", which sees seats on flights offered at a hefty discount well ahead of time, getting steadily more expensive as bookings increase. In addition there's the "ancillary revenue" - selling things such as seat choice, check-in baggage and meals, which many airlines give as standard but which equally many passengers have no need of.

Dynamic pricing was not actually new to Turkey; entrenched national carrier Turkish Airlines adopted it for international flights before 2005 but which, due to lack of serious domestic competition, it had never been used on domestic flights. Eight years on and Turkish Airlines' share of the domestic market has shrunk to just under 50% and Pegasus has grown to 27%, with four smaller competitors sharing the rest.

Sabanci points to a number of factors helping Pegasus' remarkable growth. These include an aggressive focus on efficiency, underpinned by a profit-sharing scheme that sees 10% of operating profit shared between the company's 700 staff.

Indications are that it works - the 45 planes in the Pegasus fleet spend an average of 13 hours a day in flight, which is higher than Ryanair (at 8.5 hours) and Easyjet (at 11.5 hours). The company's "cost per available seat kilometre" (CASK at around €4.15 is second only to Ryanair in Europe and is the fourth lowest globally. No surprise then that Pegasus enjoys profit margins between 5% and 5.5% higher than Turkish Airlines.

All this comes despite its larger domestic rival enjoying the benefits of bilateral government agreements restricting flights on many international routes to the two national carriers. "But like any business this never gets any less liberal," laughs Sabanci, pointing out that while Turkish Airlines may be pioneering new routes, once liberalised Pegasus will be able to take advantage of demand offering cheaper flights, continuing its remarkable growth. "It is slowing down, but we are still growing at just under 40% a year."

There is still plenty of scope to grow. The Turkish and regional markets have growth with the market penetration of low cost air travel at only 27% in Turkey and 13.5% in the surrounding regions, compared with 42% in continental Europe.

And it is to the region that Pegasus is looking for growth, Sabanci says, pointing to the huge potential of markets such as the Turkic republics, Saudi Arabia and Russia - with Pegasus having started flights to Moscow in October. That potential lies not just in those countries as destinations, but also in Turkey - specifically Istanbul as a transit hub between Europe, and all points south and east. "That's why the government is building one of the world's largest airports in Istanbul," he says, referring to Istanbul's recently announced third airport. "Turkey is sitting pretty." 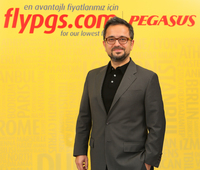