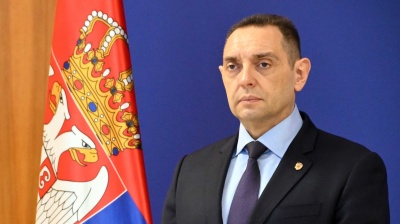 Interior Minister Aleksandar Vulin has argued that Serbia doesn’t belong in the EU, whose members in any case "don't want" to admit Serbia.

Serbia has been an EU candidate country for more than a decade, since March 2012, and started accession negotiations in 2014. President Aleksandar Vucic has said joining the EU is the country’s top foreign policy priority. However, enthusiasm for reforms aimed at accession has waned as the process has dragged on for years, with no prospect of joining in the foreseeable future.

The key sticking point has been Serbia’s refusal to recognise Kosovo – which unilaterally declared independence from Belgrade in 2008 – as an independent state. The EU requires the two countries to normalise their relations if either is to progress towards EU accession.

Moreover, following Russia’s invasion of Ukraine in February, Serbia has been strongly criticised by EU officials and politicians from EU member states for its refusal to join sanctions on Russia.

Vulin, a key pro-Russian voice within the cabinet, said in an interview with Vecerni Novosi published on October 14 that Belgrade should accept that the EU does not want to admit Serbia.

"The question is not whether we want to join the EU, but whether the EU wants Serbia. Judging by the insane blackmail they are exposing us to to recognise Kosovo, abolish Republika Srpska and impose sanctions on Russia, they don't want us,” he said.

“The sooner we accept that they don't want us and that we don't belong there, the better off we will be. The attitude towards the EU is not a matter of emotions but of rational decisions.”

In its annual progress report published on October 12 the European Commission urged Serbia to firmly commit to the EU strategic direction and reform path. The Commission noted that Serbia had failed to align with the EU restrictive measures against Russia, following the latter's invasion of Ukraine, and the majority of declarations by the EU high representative on this matter.

Commenting on the recent proposal by France and Germany for a deal on Kosovo – under which Serbia wold get an accelerated path to the EU if it allows Kosovo to join the UN and other international organisations – Vulin was highly sceptical.

“[W]here did you see the accelerated reception? As far as I know, the final decision is made by each parliament of each EU country. Do you really think that Croats will vote for Serbia's accession to the EU without any other conditions?” he commented, referring to the often troubled relationship between Serbia and neighbouring Croatia, which as an EU member has the power to veto Serbia’s progress.

Bilateral disputes with neighbouring states previously stalled the progress of another candidate county, North Macedonia, which was blocked by first Greece and later Bulgaria from opening accession negotiations.

Vulin also criticised the EU as an institution, commenting: “With the loss of political independence, EU members begin to lose their economic strength, which was the main reason for the EU's attractiveness.”

Vulin paid a two-day visit to Moscow on August 22-23, during which he met Foreign Minister Sergei Lavrov and other Russian officials. At the meeting with Lavrov, Vulin said that Serbia is the only country in Europe that has not “become part of the anti-Russian hysteria”.

The trip sparked a dispute with his colleague Deputy Prime Minister Zorana Mihajlovic, who accused Lavrov of “abusing” Serbia’s decision not to impose sanctions on Russia by falsely claiming Serbia supports Russia's invasion of Ukraine. That prompted Vulin to publicly defend Lavrov.

There is strong pro-Russian sentiment within Serbia. A June poll from Demostat showed overwhelming support for Russia and opposition to joining Western sanctions among the Serbian population. According to the poll, 80% of respondents opposed sanctions on Russia, against only 9% in favour.