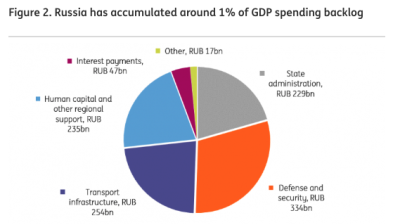 Russia entered 2020 with a spending backlog of around 1% of GDP, a surplus of 1.9% GDP and budget breakeven price under $50 all mean spending is set to increase in 2020
By Dmitry Dolgin chief economist Russia at ING in Moscow January 21, 2020

Russia entered 2020 with a spending backlog of around 1% of GDP, which the new cabinet may now start unwinding. With the budget breakeven oil price below $50/bbl there is some space to increase spending. A potential easing of fiscal rules remains a key question as it affects FX interventions and state borrowing plans

According to preliminary government estimates, the Russian federal budget surplus reached 1.8% of GDP in 2019, or RUB2.0 tr, which is slightly below the Bloomberg consensus forecast (of three analysts) but very close to our RUB1.9 tr expectations. While the surplus shrank compared to 2.6% GDP seen in 2018, it is not a sign of deterioration in Russia's fiscal position: 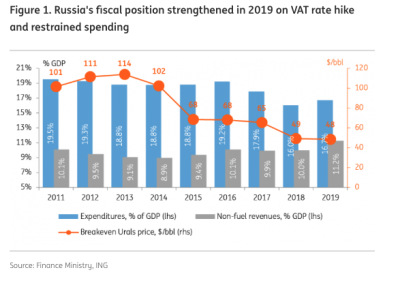 2020 budget plan may be revised to incorporate higher spending

Overall, the 2019 budget report highlights the decline in macro risks, which has been the Russian government's key priority over the last five years. However, with the recent government reshuffle ahead of parliamentary elections scheduled for 2021, this approach might be adjusted in favour of a somewhat more relaxed fiscal approach. Therefore, over the coming weeks, investors should expect some indication from the government as to what will be the scale of extra spending.

For now it appears that budget stability remains a priority. The new prime-minister Mikhail Mishoustin indicated that new social support measures anounced by the president and worth 0.3-0.5% of GDP per year will not require an ncrease in the overall spending plan (i.e. there will be some redistribution). As a result, there is a chance that the previous spending plan for 2020, which assumed a 0.6 pp of GDP increase to 17.3% of GDP, will remain intact.

Meanwhile, the question remains as to what will happen to the spending backlog that has been accumulating over the past few years as a result of continuous under-spending relative to the plans. Looking at the Finance Ministry's budget reports, it appears that the government fulfilled 98.5% of its spending plan for 2019, suggesting underspending of around 0.2% of GDP for 2019 alone. In the meantime, the total amount of unspent allocations is RUB1.1 tr, or 1.0% of 2019 GDP.

The structure of this backlog is broad-based, as it appears that over the last few years only spending on social support and mass media has reached nearly 100% fulfilment. As the new prime minister has been credited with improving the efficiency of the state administration, not least in taxation services of, which he was in charge, it would be reasonable to assume that some unwinding of this backlog will take place in 2020, with possible redistribution towards more targeted spending on both social support and infrastructure spending.

Details on spending plans will be key for determining household and corporate activity expectations as well as their inflationary consequences. 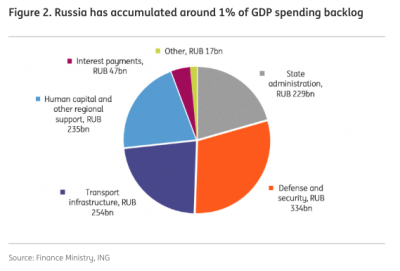 Future of the fiscal rule is the key uncertainty for markets

The second big question (and to market participants, it's probably the first) is whether some easing in the fiscal rule will be required in order to accommodate the shift in economic policy priorities. In practice, easing means an increase in the 'base' oil price - determining, which portion of the (base) fuel revenues s allowed to finance current expenditure and, which part is treated as extra and needs to be transferred into the National Wealth Fund beyond the currently designated 2% per year (see Figure 3). The PM has recently indicated that it is a possibility.

As we mentioned in our recent article, the fiscal rule may indeed be eased and not just to accommodate new economic policy initiatives on the spending side. It could also account for the likely under-collection of oil revenues stemming from the actual ruble exchange rate being stronger than drafted in the budget. According to our estimates, should $/RUBremain at the current 61-62 range in 2020 (although not our base case) instead of depreciating to the currently drafted 65.7, the budget will under-collect RUB500-600bn in annual revenues.

In either of these two events, the unchanged budget rule would dictate an increased net borrowing, which is already planned at a high level of RUB1.7 tr for this year. The increase in the threshold oil price by $1/bbl lowers the annual borrowing need by RUB110-120bn per annum and reduces the amount of annual FX purchases by $1.7-1.9bn. Therefore, it would be reasonable to expect that in order to address either of the two challenges (extra spending and fuel revenue under-collection) the budget-rule oil price could be increased by around $5/bbl. That would lower the expected amount of annual FX purchases by up to $10bn in 2020 and prevent the potential increase in the borrowing requirement by RUB500-600bn.

Depending on the fiscal rule decision - and we hope to see some signals in the coming weeks - and the scale of potential easing, some relief to the ruble and bond market may follow. However, a sharp easing (i.e. increase in the base oil price by $10/bbl or more) might cause the investment community to question the sustainability of Russia's previous commitment to macro stability. 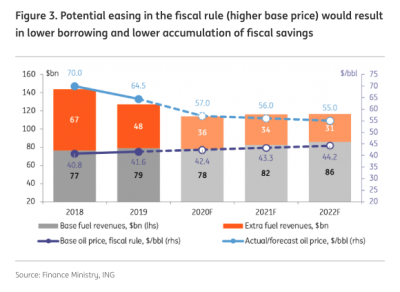 The full list of the new Russian Cabinet members is expected to be announced this week, after, which some details on the budget policy my follow. For now, we expect to see a modest upward revision in the 2020-24 spending plan, in order to unwind the 1% GDP spending backlog accumulated over the previous years. With the budget breakeven oil price staying below $50/bbl and fiscal reserves of over 7% of GDP along with a public debt of under 15% of GDP, this is unlikely to cause nervousness about Russia's macro stability and on the contrary might improve the mood of households and corporates. Meanwhile, the discussion on the fiscal rule remains the key uncertainty for the FX and bond markets' outlook right now.

TURKEY INSIGHT: Moody’s warns of autumn peril
4 days ago
MITTELEUROPEAN INSIGHTS: Better $1.5bn from Russia or €1bn from the EU in the hand than $15-20bn in the bush?
4 days ago
COMMENT: Ukraine’s the Old Rotten System is alive and well
9 days ago
STOLYPIN: Whatever is happening to Putin?
12 days ago
FPRI BMB Ukraine: Lawmakers’ promises, one year later
16 days ago