Economists were predicting an exchange rate of RUB72 to the dollar a month ago. Now they say RUB75 is more likely.
By Dmitri Dolgin chief economist Russia ING April 13, 2021

In 1Q21, the ruble weakness was caused not just by political tensions, but also by a disappointing trade balance and resumed preference for foreign assets by residents. We have downgraded our mid-year ruble expectations to USD/RUB75 and do not exclude a reduction or suspension of CBR FX purchases in case USD/RUB hits 80 under stable oil prices.

The Russian current account was reported at $16.8bn for 1Q21, underperforming both market consensus and our expectations of $20bn. There were two key reasons for the underperformance.

First, fuel exports totalled only $45bn in 1Q21, matching the 3Q17 result, even though the Urals price in 1Q21 was $60 per barrel, or $8/bbl higher than in 3Q17. In terms of exports per $1/bbl, the result is 0.75, close to historical lows (See Figure 1), which could be attributed to a decline in physical volumes of exports in order to support local supplies. While initially the cut was supposed to be limited to February, it appears that it is more long-lasting. For now, we assume a gradual recovery in Russia's oil exports from 4.5mn barrels per day in 4Q20 towards a multi-year average of 5.0mn bpd in 2021 amid the relaxation of OPEC+ constraints, but the apparent shortage in local supplies, which is pushing up local gasoline prices, poses a risk to this view.

Second, merchandise import growth proved much higher than expected growth of 12% year on year in 1Q21 after a 6% y/y drop in FY20. The non-CIS imports data (accounting for 87% of the total imports) suggests that around 3 percentage points of that growth was related to imports of maritime vessels, which could be one-off. But the remaining 9pp were assured by higher imports of mechanical equipment, vehicles, electric equipment and pharmaceuticals, which appear more sustainable and related to state intermediary and investment spending, including that disbursed at the end of 2020.

The weakness in fuel exports and strength in merchandise imports have outweighed the positive developments, such as acceleration of non-fuel exports to 12% y/y in 1Q21 from 1% in FY20 (presumably on continued gold exports), and restrained services imports (-32% y/y) on continued travel restrictions amid the second wave of coronavirus (COVID-19) globally. Entering the resort season, a possible closure of popular destinations, such as Turkey, could delay the return of a highly negative services balance for Russia, but for the full effect the restrictions need to last through the high season of 3Q21.

Based on 1Q21 performance and under unchanged an Urals price assumption of $63/bbl, we have downgraded our full-year current account surplus expectations from $70bn to $55bn. At the same time, we note that because of continued travel restrictions, likely recovery in fuel and non-fuel exports, the quarterly current account surpluses this year should be even more than in the previous years, at $10-15bn in the next three quarters, lowering the likelihood of additional ruble vulnerability in 3Q21.

Private capital outflow moderated, but preference for foreign assets is back, and foreign portfolio outflows add to the pressure.

The net private capital outflow of $11.8bn does not appear large, given the seasonality, and on a trailing four-quarter basis represents some deceleration to $42.1bn from $48.4bn in 2020. Nevertheless, we still have a number of concerns. First, the number still looks elevated compared to the current account, suggesting outflow of local capital in addition to the usual saving of excess current account in FX. Second, the structure of 1Q21 appears weak, as the outflow was fully assured by the accumulation of foreign assets and was equally split between banks and non-financials. This suggests that the pause in the foreign assets accumulation seen in 2020 was indeed temporary and related to pandemic-driven shocks, and now the balance of payments is back under pressure of low local confidence in the private sector.

The pressure from the private capital account was amplified by the portfolio outflows from the state ruble bond market, OFZ, which totalled $3.3bn in 1Q21 on the back of global bond market volatility and Russia-specific factors, including increased foreign policy tensions, acceleration of CPI and expectations of large OFZ supply. Given that the global bond market remains under pressure, uncertainties surrounding foreign policy are unlikely to be resolved soon (deadline for new US sanctions related to chemical warfare is set for early June), inflationary newsflow remains tense, and the Finance Ministry is so far not seen as willing to cut the RUB2.7 trillion net borrowing plan, the OFZ portfolio flows are unlikely to become a support factor for the ruble in the immediate future.

Finally, starting 1Q21, the Finance Ministry is back to FX purchases according to the fiscal rule, which is fully mirrored by the Central Bank of Russia (CBR) on the market, with $4.1bn purchased in 1Q21, and another $21bn of purchases expected to be conducted in April-December under our oil price scenario. Meanwhile, the recent indication that Russia is considering around RUB1 trillion of infrastructural investments from the National Wealth Fund in 2021-23, the amount of annual expected FX purchases could potentially be reduced by $4-5bn this year.

Downgrading the ruble to 75 at mid-year, CBR might consider reducing or suspending FX purchases in case of USD/RUB falling to 80.

Lack of fundamental support from the key elements of the balance of payments has derailed our optimism on the ruble in the medium term. Weak oil exports, fast growth in imports, accompanied by a high preference for foreign assets by residents and risk-off mood by portfolio investors are important obstacles for the ruble in returning to the 70-75 range in 2Q. Our mid-year target is now 75.0, with high volatility in the 75-80 range possible due to intense nervousness on the market.

The current ruble weakness, stemming mainly from non-oil factors, has led to a noticeable decoupling with oil prices (Figure 4) and EM/commodity peers (Figure 5), resembling a situation of August 2018, when the CBR decided to suspend the market FX purchases mandated by the fiscal rule for 4.5 months. We do not exclude that in the case of stable oil prices and USD/RUB hitting 80 for reasons of capital outflow, the CBR might consider a similar option this time. A confirmation by MinFin of infrastructure investments from the National Wealth Fund could be an additional justification.

Meanwhile, in the longer run we remain constructive on the ruble. A return into the 70-75 range is still possible in 2H21 provided foreign policy newsflow stabilises and re-opening of foreign travel in 2H21 is gradual. Russia's relatively strong state finances and preference for higher real rates suggests that under a stable market environment ruble assets should fare stronger than their immediate EM/commodity peers. 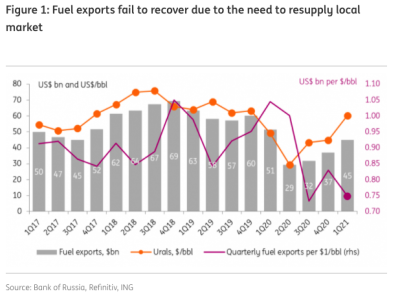 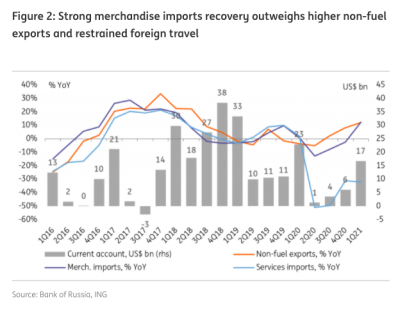 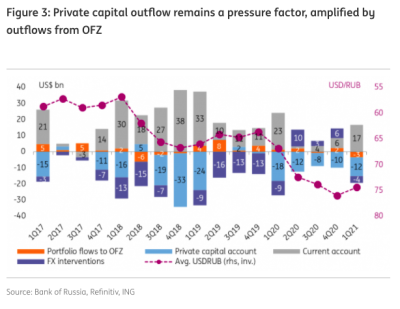 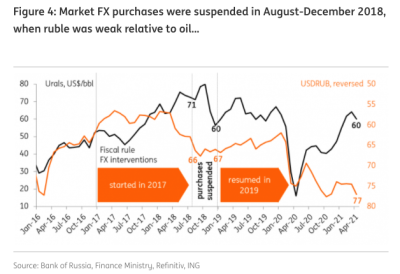 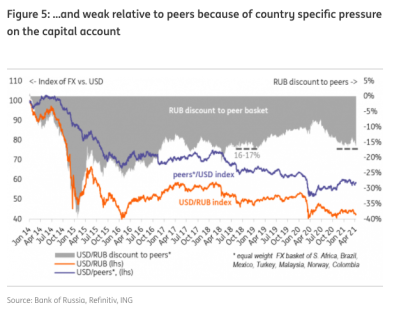 Dmitri Dolgin is the chief economist for Russia at ING. This note first appeared on ING’s THINK.ING portal here.

IFPR BMB Russia: Russia’s inflation caused by greed
23 hours ago
MACRO ADVISORY: The five Stans back in the Game
3 days ago
ING: Hungary's inflation is back to 2012 levels and above 5%
3 days ago
AFC CAPITAL: Uzbekistan’s Capital Markets Development Agency restructured as privatisation looms
3 days ago
10 megatrends shaping emerging Europe in the post-pandemic 2020s
5 days ago