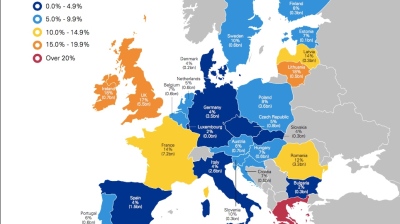 Consumption of illicit cigarettes declined across most of the new EU member states from Central and Southeast Europe last year, in line with the overall trend across the bloc, says KPMG’s latest annual report on the issue published on June 18.

Across the EU, the UK, Norway and Switzerland, a total of 38.9bn illicit cigarettes — counting both counterfeit and contraband (C&C) — were consumed in 2019, 7.9% of the total.

The share of illicit cigarettes out of total consumption fell across most of the eastern EU, with the largest decrease, of 2.8 percentage points (pp), reported for Romania. This was the second-largest year-on-year decline in the 27-country bloc after Sweden. On the other hand, there were modest increases in the share in Hungary, Latvia and Slovenia.

Poland was the EU's largest illicit consumption market after France and the UK, with 3.6bn illicit cigarettes consumed in 2019, down 0.5% y/y. Other major markets in Central and Southeast Europe were Romania (3.3bn cigarettes, down 0.6%) and Czechia (0.8bn, down 0.2%).

Germany and Austria were the only markets in the 10 biggest in the EU to see an increase in C&C consumption in 2019, said the report.

Across the eastern EU member states, C&C as a percentage of total cigarettes consumed was highest in Lithuania (18%), Latvia (14%) and Romania (12%). Among all the countries studied by KPMG, the share was highest in Greece at 22%, with Lithuania in second place, followed by the UK (17%).

This came in the context of the contraction of total cigarette consumption in the EU by 2.4% in 2019, in line with the long-term trend. C&C volumes declined at a faster rate than total consumption, down 10.8% in 2019.

The report points to the economic damage caused by the illegal cigarette trade: “Had these cigarettes been legally purchased in the countries in which they were identified, an additional €9.5bn in taxes would have been raised in the EU.”

There were changes within the structure of the C&C trade in 2019, with illicit whites (cigarettes produced legally in one market but smuggled across borders for sale in a market where they have limited or no legal distribution) and counterfeit cigarettes for the first time accounting for more than 50% of C&C consumption in the EU, while the share of contraband products dropped.

“This growth in illicit whites and counterfeit may be driven by increasing volumes from illegal factories within the EU, as noted in our interviews with law enforcement,” according to the report.

KPMG estimated that in 2018 EU manufacturing could have accounted for up to 5bn of EU counterfeit consumption in 2018, meaning that the majority of counterfeit cigarettes consumed were of EU origin.

Illegal manufacturers of cigarettes are becoming “increasingly complex” in their operations, says the latest report, for example by setting up multiple manufacturing premises to reduce the impact of raids, investing in high-tech equipment and lowering the risk of detection by carrying out smaller volume, higher frequency shipments.

Illicit flows of cigarettes from outside the EU declined, including those from identifiable markets such as Ukraine and Belarus — two of the main source countries for CEE consumption — that continued to decline. By contrast, illicit flows between EU countries increased.

“Illicit consumption in the EU continued the trend towards flows from non-identifiable origins (illicit whites with no country-specific labelling and counterfeit) and away from historical sources such as Ukraine and Belarus … illicit cigarettes that can be identified as flows from one EU country to another remain a relatively small component in comparison with non-EU and non-identifiable sources,” said the report.

Flows from poor to rich

There is a clear flow of cigarettes, both legal and illegal, from poorer to richer parts of Europe.

In addition to the still important source markets of Belarus and Ukraine, Southeast European countries saw inflows from the non-EU countries of the Western Balkans: Bosnia & Herzegovina, North Macedonia and Serbia in particular. Northern Romania, the corner of the country that borders Moldova and Ukraine, had the highest C&C cigarette consumption in the country.

Also, while Belarus and Ukraine supply illicit cigarettes to Central European countries such as Poland and Czechia, those CEE countries in turn are suppliers to major west European economies.

With Brexit approaching throughout 2019 and corresponding uncertainty about the future of EU workers in the EU, outflows of illicit cigarettes from Poland, for example, to the UK declined during the year “against a backdrop of reduced traveller numbers”.